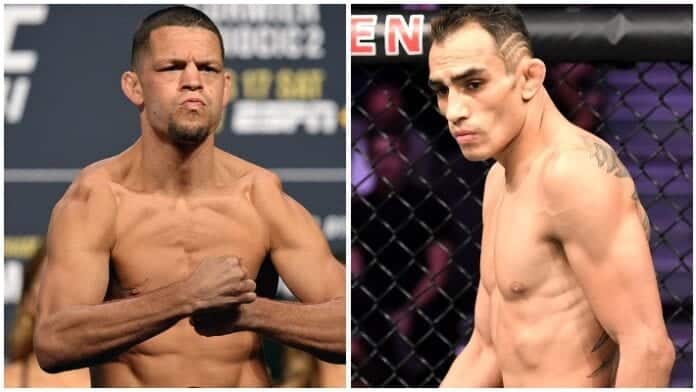 Former UFC Lightweight king Khabib Nurmagomedov has been enjoying his retirement since October 2020 but his public feuds with high profile fighters Tony Ferguson and Nate Diaz have continued to burn in the spotlight since his retirement.

During a recent appearance this week on the Hotboxin’ With Mike Tyson podcast, Nurmagomedov opened up on multiple topics. One of the topics he talked about was street fighting.

Nurmagomedov pointed out that his mother strongly disapproved of him taking part in street fights but understood that he needed to defend himself in that scenario. She also told him to “never come home” if he were to lose.

Khabib’s longtime rival that he never got to face Tony Ferguson took to Twitter to talk trash about Nurmagomedov’s statement, saying he’s 29-1 due to never meeting him inside the cage and unfortunately having their fight canceled on a number of occasions.

Meanwhile, another rival of Khabib’s, Nate Diaz took to Twitter as well after hearing about Nurmagomedov’s appearance on the podcast, saying “That kabobs full of sh*t”

While Nurmagomedov has been retired for the last 10 months, both Ferguson and Diaz remain very well in the game, although both are coming off tough losses to Beniel Dariush and Leon Edwards respectively.

It seems likely Ferguson will still be competing at Lightweight for his next fight while Diaz is likely to remain at Welterweight. A fight between the 2 veterans has been tossed out there before and a move to Welterweight could make sense for someone like Ferguson coming off 3 straight losses.

Do you think Tony Ferguson and Nate Diaz will continue to troll Khabib Nurmagomedov?