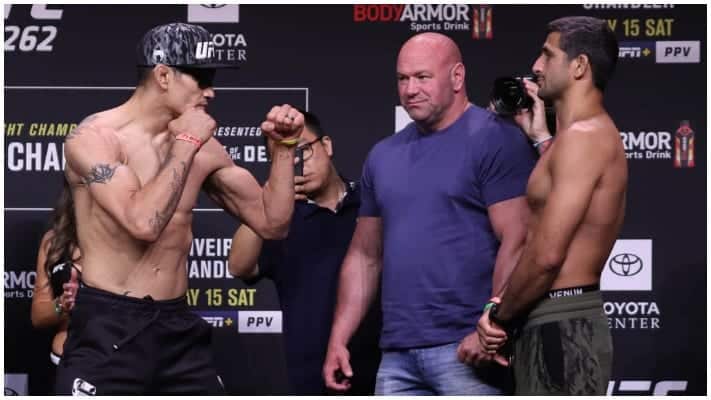 In the UFC 262 co-main event, Tony Ferguson looks to end his losing streak against Beneil Dariush.

Round 1: Tony Ferguson charges forward early and eats a shot from Beniel Dariush. Dariush is going after him early here. He’s throwing big shots upstairs and also landing heavy leg kicks. Dariush shoots and scores with the takedown. Ferguson is working from the bottom, he appears to be setting up a triangle choke. ‘El Cucuy‘ is using the position to hammer home ground strikes from the bottom. Ferguson recovers guard but is eating lots of strikes from Dariush right now. Ferguson tries to reverse off the fence, he almost pulls it off before Dariush secures the position once again. Ferguson tries to sneak of the backdoor but Dariush again does a great job to maintain position. The rounds ends in something of a stalemate on the mat.

Round 2: Dariush shoots early and gets the fight to the floor once again. Ferguson accepts the position and tries to sink in a D’arce choke. The former interim champion is holding onto the neck but it doesn’t seem to be on. Dariush eventually pops out of the submission attempt and begins dropping bombs from the guard. Dariush moves into half-guard. Ferguson pops back to his feet but is quickly dragged back down. Ferguson reverses the position it but Dariush sits back for a heel hook. It looks super tight. Ferguson is wincing in pain but refuses to tap. ‘El Cucuy’ kicks his way out of the submission attempt but he’s still on the bottom being dominated by Dariush who ends round two on top.

Round 3: Ferguson looks wobbly on his feet at the start of round three. Dariush is mixing up his strikes and takedown offense. He picks up Ferguson and slams him to the mat. ‘El Cucuy’ is walking up the wall but seems stuck on bottom. Dariush seems content to maintain this spot, he’s not trying to advance or really throw any strikes but he’s got side control right now. Ferguson again tries to wall walk but it’s just not working. ‘El Cucuy’ is trying to secure a choke from the bottom but Dariush pops out. Ferguson tries to get out the back but Dariush follows him and maintains his position. Dariush is dropping punches from the guard now. He rides out the fight on top and will get the biggest win of his fight career.