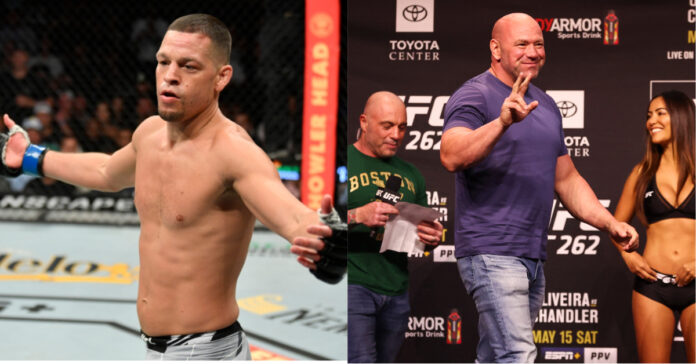 UFC welterweight, Nate Diaz, responds to Dana White’s comments over Diaz’s record over the past few years, with the UFC president noting that “Nate’s won one fight in five years.”

The long-lasting and at times venomous feud between the UFC and Nate Diaz has seemingly no signs of coming to an end. and now it seems that the Stockton native may have fought his last UFC bout.

Since his loss to Leon Edwards last June, Diaz has been campaigning on social media for a fight, but oddly we have not seen one of the biggest stars on the UFC roster fight for over a year, all while being healthy and seemingly ready to step in with just about anyone.

Things took an ugly turn earlier this week when Diaz took to his Twitter in a plea for the UFC to release him as he has ‘bigger s**t to do’, accompanied by a video of Jake Paul, teasing a potential fight between the pair.

White would respond to this in an interview with ‘TheMacLife’, surprisingly urging Diaz to fight Paul, whom he also has an ongoing feud with.

“Nate’s won one fight in five years, so we’re trying to figure this thing out with him. He probably should go on and fight Jake Paul. That’s a fight that makes sense.” (H/T MMA Fighting)

It wouldn’t take long for Diaz, who seems to enjoy winding up other fighters and particularly White, to respond to White’s comments about him. Diaz would tweet out a video of his fight against Leon Edwards fight, where in the fifth round, after receiving a dominant beating the entire fight would severely wobble Leon with a right hand, nearly ending the fight.

The video would then cut to other UFC stars such as Gilbert Burns, Justin Gaethje, Michael Chandler, and Jorge Masvidal all being finished in fights, captioned “at least I never really lost like all these f**kers.”

Will Nate Diaz fight in the UFC again?