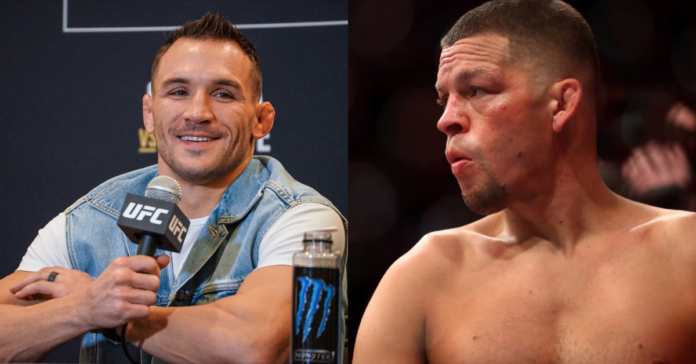 According to Michael Chandler, Nate Diaz stepping away from the UFC has confirmed his thoughts that the UFC is the only show in town. At UFC 279 Stockton’s Diaz had his final fight in the organization when he submitted Tony Ferguson in the main event.

It was not easy for the UFC and Nate Diaz to have agreed upon terms to make a fight happen. The two parties did not see eye to eye and the fighter sat out most of the year even requesting his release from the organization. After all that, Diaz still took the fight. According to ‘Iron’ Michael Chandler, this shows that the UFC is the center of combat sports.

While speaking with Ariel Helwani on The MMA Hour, Chandler added that Nate Diaz will likely be back in the UFC in the future. He said:

“Even with the middle fingers to the man and the water bottles thrown, he still said, ‘I’mma come right back here to the UFC.’ Why would Nate say that or want to that? It just goes to show, this is the place to be, this is the big show. So, he’s gonna go out and have a little bit of fun, do some other sports, and we’ll see Nate Diaz back in the UFC down the line.” [Transcription courtesy of MMAnews.com]

Michael Chandler is well familiar with life outside of the UFC. Before making his promotional debut in 2021, he was a draw for Bellator. Out of his 30 total professional fights, 23 of these have been in Bellator. While there he matched against fighters such as Benson Henderson, Brent Primus, Eddie Alvarez, Will Brooks, and others. ‘Iron’ was also a three-time Bellator lightweight champion and had three title defenses to his name. In 2021, he made his debut in the UFC and has been one of the most exciting fighters in its lightweight division.

Michael Chandler on what’s next for Nate

‘Iron‘ Michael Chandler, knowing the value of life in free agency, fully recognizes the monetary value that the name Nate Diaz has. Whether it’s boxing YouTubers, boxing professionals, another MMA organization, or bare-knuckle, the Stockton-born fighter will be well taken care of wherever he goes.

On The MMA Hour, Chandler continued:

Michael Chandler has a major challenge ahead of him. Coming off of a knockout win over Tony Ferguson, ‘Iron’ will meet the former interim UFC lightweight champion, Dustin Poirier, at UFC 281. This fight has been booked for Madison Square Garden in New York City on Saturday, November 12