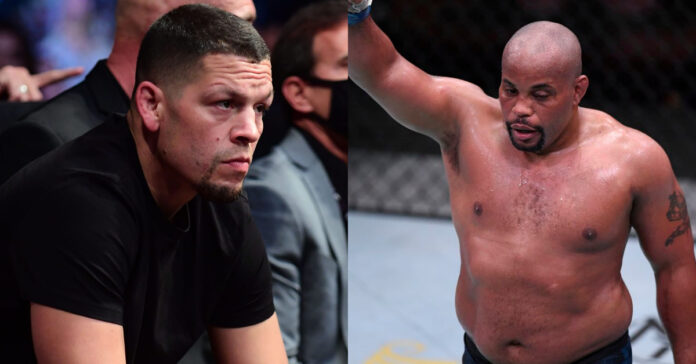 Diaz took on Ferguson on a day’s notice after Khamzat Chimaev, who was originally scheduled to face Diaz, came in seven and a half pounds overweight at UFC 279. It marked the final outing of Diaz’s contract with the promotion, meaning he would be able to explore free agency after. He secured a win over Ferguson by submission in the fourth round.

Diaz took to his Twitter to bash “DC” for suggesting that Ferguson was done as a fighter.

“Respect your OG you fat motherf*cker,” he wrote.

Cormier believes Ferguson is a ‘shell of himself’ and should retire

Following Ferguson’s fifth straight loss, former UFC two-division champion Cormier criticized Ferguson for his performance. Cormier believes Ferguson’s best days as a fighter are behind him and that it’s time for him to step away from the game.

“I could not believe what I was seeing,” Cormier said on DC & RC. “I’m not saying it was the worst fight of all time, not by any stretch of the imagination. It tells me that Nate Diaz still has a little bit left in the tank if he wants to fight, but it also tells me Tony Ferguson is done as a guy that I’ve seen in the octagon. Tony Ferguson is done, bro. He is a shell of himself and he doesn’t want to retire. He actually said he feels like he got better, he saw some good things. I’m like what did he do in there to show that he’s better than he was prior?” (ht MMA Fighting)

Do you agree with Daniel Cormier‘s take on Tony Ferguson?