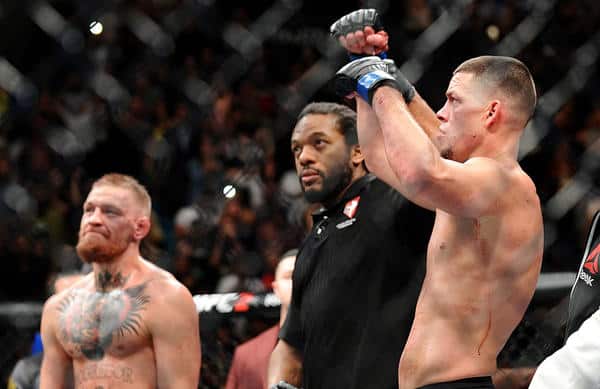 Nate Diaz is back, as the Stockton native comes off a big unanimous decision win over Anthony Pettis at UFC 241.

After the bout, Diaz decided to call out fellow fan-favorite welterweight Jorge “Gamebred” Masvidal. It was a shocking move to some, considering many believed Diaz would call out longtime rival Conor McGregor for their trilogy bout. Now, Masvidal claims the fight with Diaz is currently in negotiations, and McGregor awaits the result of the upcoming lightweight title fight in Abu Dhabi before plotting his next move.

However, that’s not to say a fight between McGregor and Diaz is possible down the road. If such an opportunity does present itself, UFC Hall Of Famer Michael Bisping believes Diaz has propelled himself into the role of the “A-side” for the fight. Speaking on his “Believe You Me” podcast, Bisping explained his position. (H/T BJPenn.com)

“Conor would be the B-side in that fight right now,” Bisping stated. “In terms of popularity, I don’t know I think Diaz may have surpassed him. He played that perfectly. He took three years away from the sport, came back, didn’t get the push from the UFC. [He] kinda like went up against the UFC.

“He was kinda that guy and came out on top. He won that battle. He was sensational, the fight was fantastic. The performance was great, he handled himself in a way that people love. He’s real, he’s authentic.”

McGregor has had a ton of personal problems since last competing inside the Octagon. However, he seems to be ready to put all of that behind him and is hoping for a return before the end of 2019.

Do you think Diaz would be considered the A-side in a trilogy bout with Diaz?