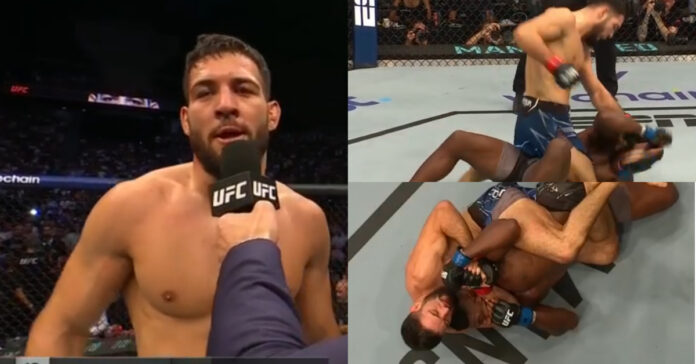 Nassourdine Imavov edged out Joaquin Buckley in an exciting barn-burner at UFC Paris.

Nathaniel Wood put on a dominant display to defeat Charles Jourdain in the opening bout of the main card at UFC Paris.

Going into the bout after two impressive finishes, Imavov was looking to extend his win streak to three against Buckley on the main card of UFC Paris this Saturday at Accor Arena for the promotion’s debut event in France.

Buckley showed some great lateral movement, keeping on the outside against the seemingly much larger opponent. Imavov knocked Buckley’s mouthguard out of his mouth in the first round with a front kick and showed major aggression. Buckley looked to be in trouble after Imavov caught a spinning kick attempt and took him against the cage but managed to escape.

Imavov’s footwork looked stellar as he remained elusive. Imavov got Buckley on the ground and landed a few strikes before the buzzer in the first. Buckley landed a good shot in the second but got taken down by Imavov, who took his back quickly for a rear-naked choke. Buckley did well to survive the submission attempt. Buckley started swinging hard and wild in the last round.

Below, catch the highlights from Nassourdine Imavov vs. Joaquin Buckley