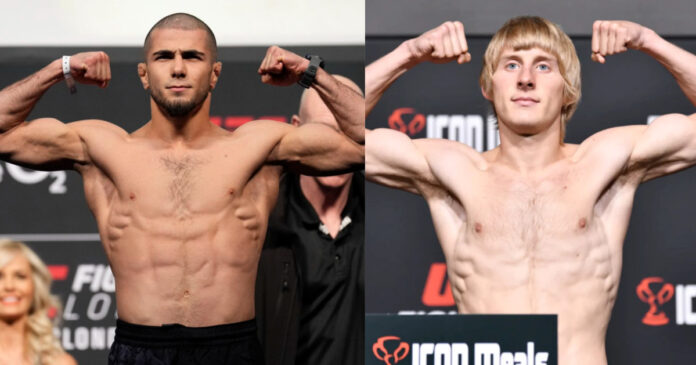 UFC bantamweight Muhammad Mokaev has stated he would be willing to fight ‘bullsh*t guy’ Paddy Pimblett at 145lbs.

One of MMA’s hottest prospects Muhammed Mokaev continued his undefeated streak when he defeated Charles Johnson at UFC London on Saturday night.

Also on the card was Liverpool’s Paddy Pimblett, who produced another entertaining fight which he would win by submission in the second round.

The pair are two of the UK’s biggest rising stars, Mokaev although was born in Dagestan, came to the UK as a 12-year-old and proudly flies the British flag as well as holding a British passport.

You would expect that Mokaev and Pimblett would support one another as the next wave of British talent, but there seems to be some animosity between them, even with them being several weight classes apart.

Talking on the MMA hour, Mokaev would express his displeasure towards Pimblett, even saying he would move up two weight classes to face him.

“Because I don’t like this guy I don’t want to talk about him too much,” Mokaev said. “In 2019, this guy shouldn’t represent England he is not born here. He shouldn’t lift British flag he is not born here, he talk bad about Georgian people, he talk about immigrants not working, coming to the UK and people support this bullsh*t guy, this is wrong.”

Mokaev referenced a Twitter exchange between the pair and a Tweet that Pimblett would put out in 2019 when he would make reference to immigrants.

Do you agree with Muhammed Mokaev?