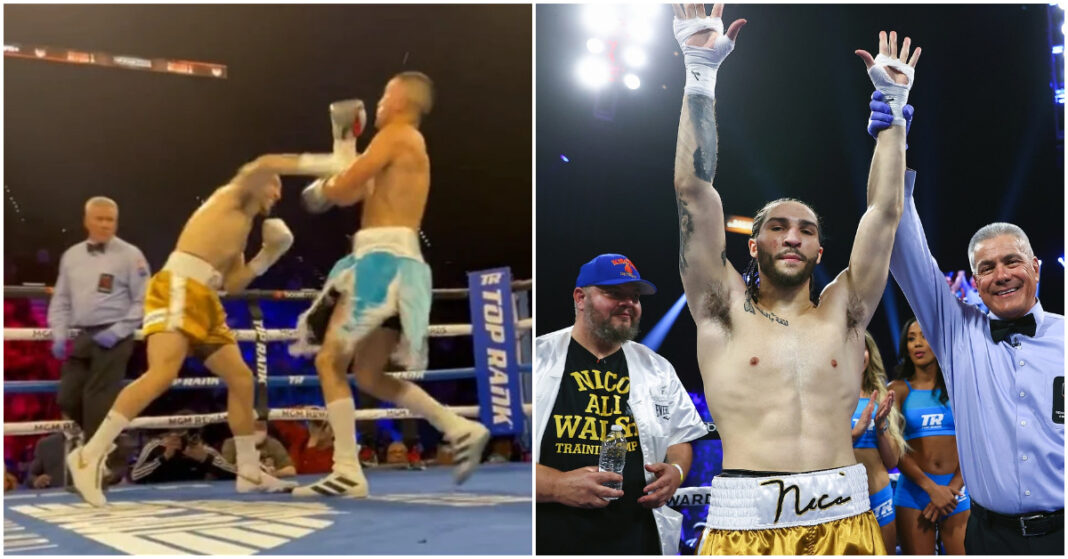 Nico Ali Walsh, a grandson of Muhammad Ali, has extended his unbeaten run to five with a brutal knockout win over Alejandro Ibarra in the first round.

Boxing legend Ali’s grandson has had a promising start in his professional boxing career. This past Saturday, Nico Ali Walsh took on Alejandro Ibarra on the undercard of Shakur Stevenson vs Oscar Valdez at the MGM Grand Arena in Las Vegas. The 21-year-old boxer is the son of Rasheda Ali, the second oldest of the boxing legend’s nine children.

Check out the first-round KO below.

Coming into the fight with an unblemished record of four victories, Nico added another knockout to his previous three KO wins with a hard-hitting overhand that sent Ibarra crashing down to the canvas.

This marked the second defeat for Ibarra in nine professional bouts. Walsh paid a tribute to his late grandfather following the win.

Nico Ali shared how his mother Rasheda gets emotional watching him compete because of his likeness to the late Ali.

“This is just a testament to all the work I put in. Stuff like this happens when you put the work in. I’m bringing my grandpa back to life, and that’s why mum gets so emotional because she’s seeing her dad again and hearing her dad’s name to me,” he said.

In addition to witnessing the incredible first-round KO by Muhammad Ali’s grandson Nico Ali, April 30 marked a very important night in the history of boxing.

Irish pioneer Katie Taylor and Amanda Serrano became the first two female boxers to headline the iconic Madison Square Garden in New York. The two athletes went to war in a close-fought contest reminiscent of Hagler-Hearns that had the roaring crowd on its feet throughout the bout.

Their 10-round affair will surely go down as one of the greatest boxing fights ever as Taylor managed to recover from a midway knockdown to defend her titles.

With performances like the one we got to see last Saturday, Nico Ali could very well be heading on the way to headlining MSG himself given he racks up an impressive record ahead.

Do you see Muhammad Ali in his grandson Nico Ali Walsh’s performance?