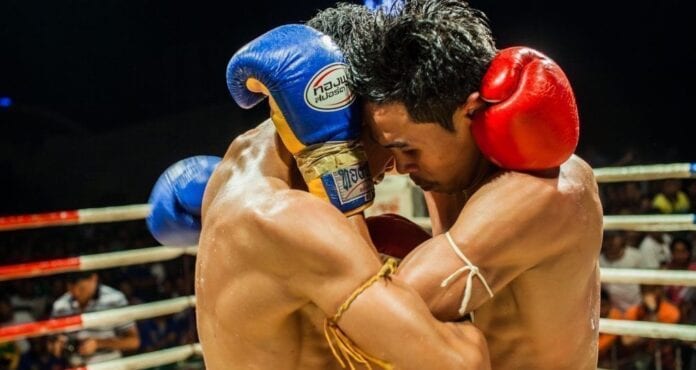 What separates Muay Thai from many other contact sports is the clinch.

As one of the most integral aspects of the sport, establishing dominance over an opponent in the clinch could be the difference between victory and defeat. In Muay Thai gyms across the planet, you will find this art heavily practiced (and for a reason). It may seem a pretty straightforward concept at first: lock into your opponent and inflict as much damage as possible. In reality, it is not this simple.

To truly master the clinch, there are a number of attacking and defensive nuances a Nak Muay must learn. From closing the distance in order to lock in, to the pressure, leverage, and posture required to establish control, there is a lot to learn. With each and every one of the Muay Thai fundamentals, we must start from the basics to one day master them.

The Basics of the Clinch

The purpose of the clinch is generally to dominate your opponent by controlling their movement. A practitioner will work their way within range of an opponent and stand parallel to them. Once they have worked their way into ample space – by way of punches, elbows, or feints – they will clutch the back of their heads and aim to control their neck as much as possible.

There are a number of techniques a Nak Muay will use when aiming to lock in on the clinch. In Muay Thai, there are three main techniques you will commonly see used in order to fight inside the clinch.

These are known as:

In order to work your way into the double collar tie, first, clasp the back of your opponent’s head. Then, place an elbow on each side of his head and shoulders. Aim for a strong, vice-like grip where you can attain maximum control. To get the right leverage, push your elbows into both sides, forcing pressure into them in order to prevent the opponent from slipping out.

This is a technique in which smaller fighters commonly use to engage with taller opponents. They do so by hooking their arms around a fighter, focusing on the upper part of their body. The lead foot is bent and the rear leg pushed back a little in order to create enough distance to throw a powerful knee or sweep them to the floor.

The single collar tie involves grabbing an opponent’s head and lifting your elbows to immobilize their shoulders. Once this has been done, press the lead hand down on your opponent’s shoulder in a pulling fashion at the same time that your elbow locks their forearm and bicep. Always remember to keep an arm on their neck with the other on their shoulder.

Attacking from the Clinch

It is important to remember that your opportunities for striking may be limited when attacking from the clinch.

This is close-quarter combat, which means that there will be little space for you to land. This lack of distance between you and your opponent means that kicks will, for the most part, be out of the equation. Knees, elbows, and punches will be your best bet (although you can also sweep and throw).

Your ability to attack from the clinch depends on your control of the situation. If you have the upper hand (pun unintended), you will undoubtedly have the access to strike your opponent. Maintaining this control will determine how long you will find these openings, however. If you think your opponent will be happy to just stand there and allow you to go to town, you will be bitterly disappointed.

Defending from the Clinch

Your opponent will look to break out of your control and may even land some counter shots if you allow them to.

More than anything, they will be trying to get a hold of your neck. If they can do so, they will ultimately render you powerless to their attacks, which can spell the end of the night for you. You can do your best to limit their chances of gaining control in the clinch by keeping your hips as close to theirs as possible, to prevent knee strikes.

Keep your posture upright and switch your stance so that your legs are just a tad wider than your shoulders. This will help you maintain better balance and strength, which will ultimately make it harder for your opposite number.

Most Effective Strikes in the Clinch

While the effectiveness of your strikes depends on creating space and connecting, there is little doubt that knees are the most damaging.

This is not to say that elbows are not effective weapons inside the clinch. There is little doubting their potency. Impacting with an opponent’s skull with an upward or downward elbow can be the same as cutting through butter with a hot knife. If you can generate enough power to drive an elbow into an opponent’s jaw or temple – while holding their head in place – you could be looking at a spectacular knockout.