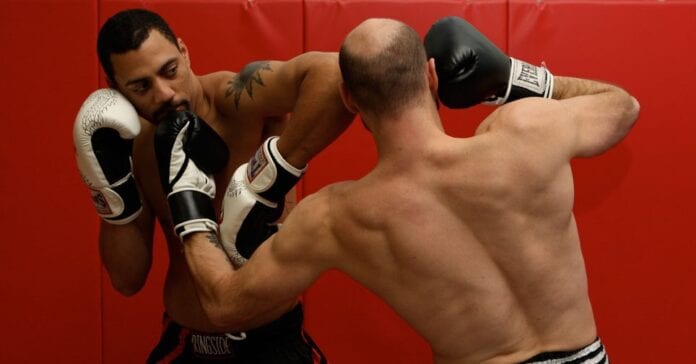 As a fighter who had boxed for years before moving over to Muay Thai, I can personally declare that there is nothing quite like eating an elbow inside the ropes. My first Muay Thai bout came with obsessive dedication; I wanted to ensure that there were no apparent holes in my game. I drilled and drilled until I could not practice no more, leaving no doubt that I would be in the best shape come fight night.

As any seasoned fighter will tell you, there is no such thing as an impregnable defense in fighting. Even the greatest Muay Thai fighters of all time have been hurt. The Samart Payakaroon’s, Dieselnoi’s, Saenchai’s… you name it, they have all suffered significant shots in their careers. It goes without saying that they have also dished out their fair share of punishment. When it comes to a slicing elbow strike, there is no sweeter punishment to dish out.

Elbow strikes are what sets Muay Thai apart from many of the traditional martial arts. This is the “Art of the Eight Limbs” and two of the most prized weapons in a Nak Muay’s arsenal are his elbows. Let’s take a look at five you should get acquainted with now.

The bread and butter elbow of Muay Thai, so to speak. However, don’t let that lure you into a false sense of treating the horizontal elbow as anything, well, simple. It is far from simple; a deftly landed horizontal elbow can be enough to knock an opponent out cold and earn yourself an early shower.

This strike is far from easy to master, which, in Muay Thai, is pretty standard. Even the strikes which appear to be – in technical terms – the simplest, require constant practice and attention. When setting yourself up to throw the horizontal elbow, lift your elbow up at a 90-degree angle, pointing the outer side of your forearm at the opponent. Then, in a hooking fashion, slice across a vertical line while aiming for your desired target.

The best way to imagine the trajectory of any elbow in Muay Thai is to first envisage a cross. With the diagonal elbow, the line of movement will be like a 2 to 7 or 11 to 5, if you were following a clock face. This strike is very powerful when you can generate the snap and connect with a sweet spot such as the chin, jaw, or temple.

These strikes are particularly useful when engaged in the clinch. In close-quarter combat, you really cause significant damage to your opponent. The key to the diagonal elbow is not to telegraph it, but swipe in and get out, as fast as you can. If things work in your favor, you could be looking at a show-stopper. A worst-case scenario could be opening a cut on your opponent which could stop the fight. Not bad at all.

Whereas a horizontal elbow and diagonal elbow slice across and in a diagonal fashion, respectively, the upward elbow requires upward momentum to damage. Much like an uppercut in boxing, the shot can be aimed at the lower jaw, chin, or nose of the opponent. Force is pushed upwards, in order to push the opposing fighter’s head back. Depending on your technique, this could be more than enough to knock them out cold.

An experienced trainer will always tell you to open up your opponent’s guard with a shot such as a hook, or even a feint, in order to create a gap. When this window opens, bring your elbow up from a 6 to 12 motion, and slice upwards with as much power as you can muster up from your stance. Drop your knees slightly, and then push or whip up with your elbow, in order to gain that upward momentum.

In simple terms, this is the opposite of the upward elbow. You want to impose pressure downwards on the target, so you will need to generate power from above. One of the best ways to throw a downward elbow is to “chop” it, like an ax. While this is elbow is rarely thrown – in comparison to those above – there is no doubt that it still a very potent weapon. The chopping elbow can be very hard to see coming, too.

The downward elbow chop can be thrown in a number of ways. While standing, you can approach the opponent (make sure it is not telegraphed, as you will regret it) with a sharp step before slamming down on the top of the skull. It can also be thrown in a jumping fashion, driven into the skull or face with the help of your downward momentum. Or, if you are technical enough, just as your break out of a clinch.

Speaking of technical prowess, the spinning elbow is probably not the first elbow strike you should be trying to master. The reason being, it requires a Nak Muay to have an advanced understanding of balance, posture, flexibility, and range, among other qualities. It is an incredibly effective weapon, mostly due to how tricky it can be to predict. If you manage to land it without your opponent expecting it, it can be devastating.

To pull it off, you will need to step out so that your lead leg is crossed by your rear. The strike should be landed by your rear hand, with a twisting motion punctuating the power that is driven into your target. This one will take a lot of practice. Defensively, you should be always open to the possibility of a counter – if you get it wrong – so be careful. If you need any encouragement, there are countless MMA spinning elbow fails out there.

There are fewer strikes in martial arts as absolutely devastating as the elbow. Your options are endless in Muay Thai, but you must always ensure that you are not putting yourself in a position of vulnerability. Technique is everything, after all, so do your homework, drill constantly, and you should see a small improvement each and every time you hit the gym.