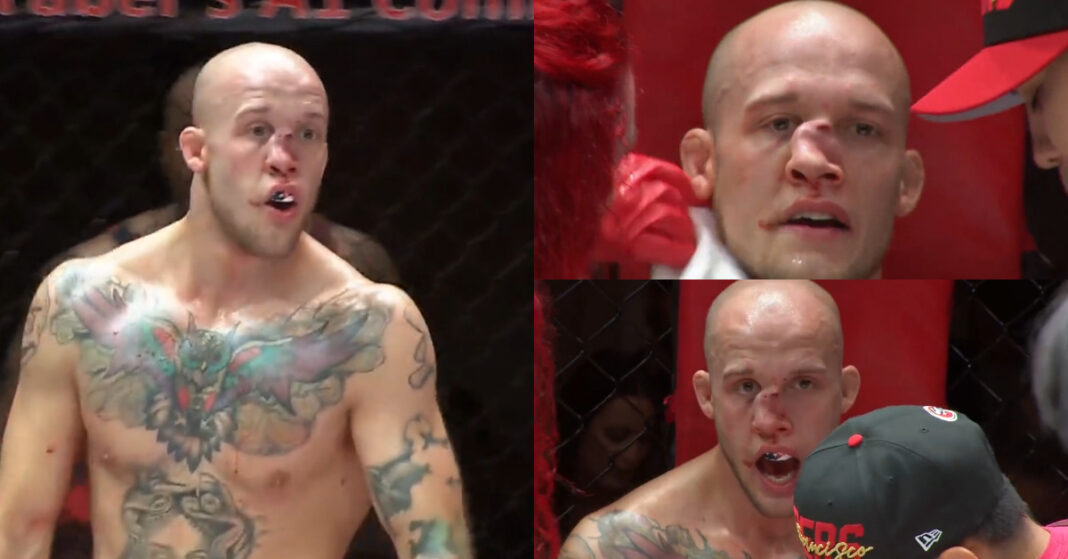 MMA fighter Blake Perry was on the wrong end of a vicious nose break.

Perry, a budding mixed martial artist, took on Marcel McCain in just his second professional match at Urijah Faber’s A1 Combat4 event in Stockton, California. McCain landed a brutal knee right to the nose of Perry, who looked very different after the hit.

MMA fighter disfigured after getting kneed in the face

In a video uploaded by the official Twitter account of UFC Fight Pass, Perry can be seen sitting on the stool as the medics worked on cleaning his broken nose and battered face as well as they could before he carried on with the fight.

The clip spread like wildfire online doing rounds on social media causing people to flinch at the sight of Perry’s unusually mangled nose. It drew a comparison to another Perry, Mike, who had suffered a similar fate in the UFC.

Perception is an interesting thing and while some found Perry’s broken nose to be too gruesome, others compared the MMA fighter to Pablo Picasso’s abstract art due to its unique interpretation of faces and bodies.

“That s*** is gonna hurt even worse when [they] have to reset it. I can almost hear the crunch,” another added.

A third quipped: “Bro changed his nose to italics.”

Someone else simply wrote: “That may be one of the worse nose breaks I’ve ever seen. Wow.”

Perry appeared to be in good spirits considering everything. He poked fun at himself on his Instagram stories by sharing videos of his disfigured look uploaded by other users.

“Y’all think his nose is broken?” one of the captions read.