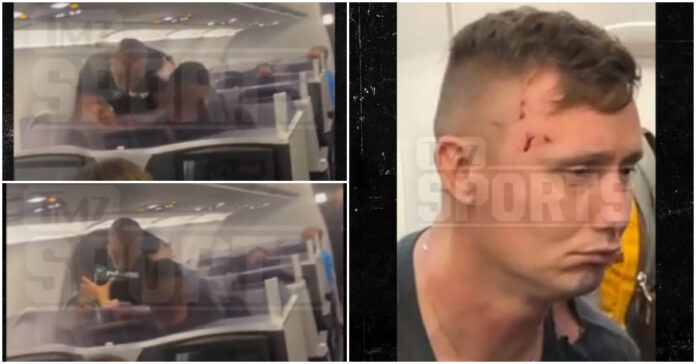 Boxing Hall of Famer Mike Tyson lost his cool when a passenger on the airplane kept provoking him.

On Wednesday night, Mike Tyson boarded a flight to Florida from San Francisco International Airport around 10.30 PM PT. Along with ‘Iron’ Mike were fellow passengers and the victim, who have been reported to get along well with the boxing legend initially. A witness reports taking selfies with the retired boxer and recalls Tyson being patient with the overzealous fan.

Sitting just behind Tyson on the flight, the enthusiastic man kept trying to talk to the 55-year-old fighter. He was rebuked by Tyson for his provocative behaviour but continued to repeat his actions even after he was told to chill out.

As per the witness report, Tyson lost his cool and attacked the man when he did not take heed to his advice as he attempted to bother him again. He landed several blows in the man’s face as he let on an onslaught of punches.

In a video obtained by TMZ Sports, Mike Tyson can be seen punching the man seated behind him multiple times causing him to bleed from the face.

Mike Tyson was reported to have walked off the plane seconds after the incident. The man who was assaulted received medical attention and went to the police with a bloodied forehead. No comments have been made by the cops, JetBlue, or Tyson’s team yet.

Earlier in March this year, Mike Tyson was at a comedy show in Hollywood, California when a man pulled out his gun and challenged him to a boxing fight. Once known as ‘The Baddest Man on the Planet’, Tyson has worked hard to transform himself into a new identity, much different from his past self.

His most recent controversy surrounds him against another man who didn’t seem to understand proper boundaries. The man was reported to have been quite drunk during the incident which may help explain his stubborn behavior.

No developments on the filings or any pressing of charges have been reported at this time.

Do you think Mike Tyson was right to punch the man?