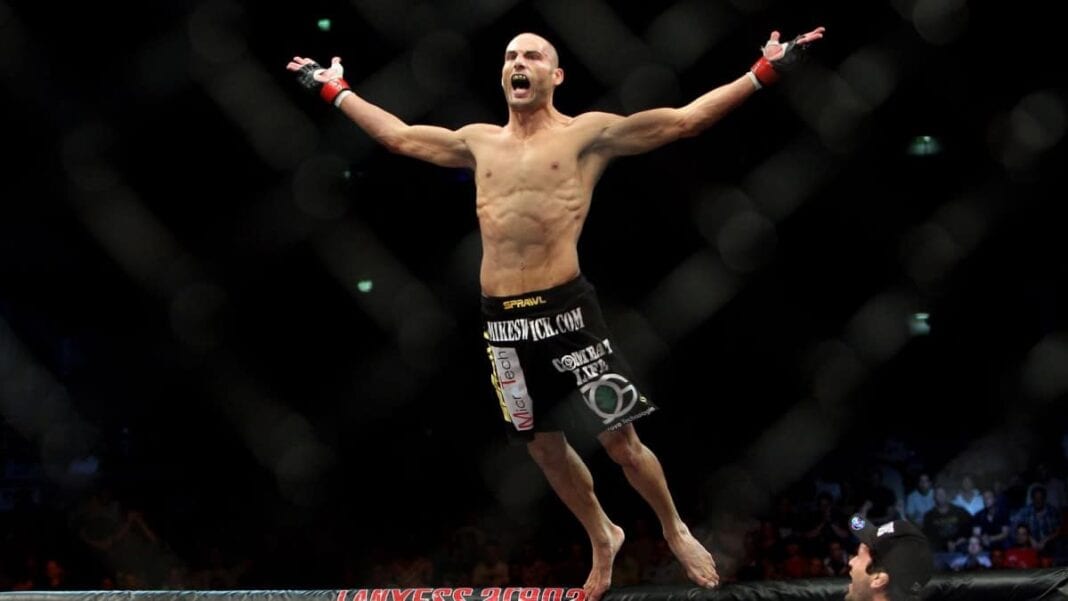 One of the last The Ultimate Fighter (TUF) 1 alums has finally called it quits as long-time UFC welterweight Mike “Quick” Swick has officially announced his retirement via his official Facebook page.

Swick, who hadn’t competed in around two years due to injuries and the founding of his gym, AKA Thailand, returned to action at UFC 189 on July 11, 2015 against Alex Garcia. Many were excited to see one of mixed martial art’s (MMA) earliest stars return to action, but the vicious striker just didn’t look like he had it anymore.

Although Swick wasn’t brutally beaten, he didn’t look like the Swick of old, and apparently, he realized this as well, stating in his message that there comes a time when every fighter becomes aware that their time is over. “Quick” mentioned that he will obviously remain in the sport, as he will still own and coach at his gym, and he also thanked all of his supporters and even his haters.

Check out the full announcement below:

“July 11th 2015 at UFC 189 was officially my final fight. I was healthy and injury free for the first time in 8 years but still couldn’t put my game together. There comes a time when every fighter realizes he is older and not what he use to be and I want to acknowledge this and stay true and honest to what I have always said, that I will leave when I know I am done. It’s a hard thing to do considering everyone wants to go out on top, unfortunately when your actually on top, you never wanna go out.”

“It’s unfair to the UFC, the fans and to my family and friends for me to keep chasing this career while giving performances that I am not proud of.”

“I remember sitting in class during high school(’98) watching UFC’s with the football team during off season and telling them I will be there one day. Now at 36 years old, I have been contracted with the UFC going on 11 years and it has completely changed my life. I am very proud to have fought and been a part of this organization for so long.”

“Though I am retiring from fighting, I will stay a big part of this sport as I continue to build fighters and grow my dream gym AKA Thailand. This gym is a massive project that has taken us 5 years to put together and once we are done, it will be the largest and most unique fight gym in the world. I am so proud to have such a great team of people behind it and I will now give my full effort towards its progress and the business surrounding it.”

“I want to thank everyone out there who has helped me over the years… My family and friends, Javier Mendez/Team AKA/AKA Thailand and all the coaches and fighters that have been a part of them, the UFC, all my sponsors, and finally the wonderful fans that have made this sport so great! It is because of all of you, that I was allowed to live my dream and that I will now be able to continue living it after my fighting career.”

“I also want to thank the haters and negative people who have entered my life from time to time. The fire that you guys created inside me is what has maybe helped me the most in my attempts to prove you wrong and succeed through your doubts. Thanks for being that fuel when I was running low on gas. wink emoticon”

“Thanks for all the support and I love you all!

Owning wins over Joe Riggs, Ben Saunders, Marcus Davis, Josh Burkman, and David Loiseau, Swick was always a fan favorite, and it will be sad to see him go.