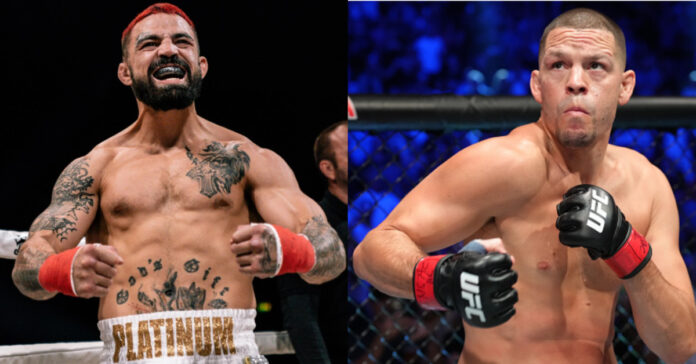 Following his fourth-round submission over Tony Ferguson and UFC 279, Nate Diaz completed the final fight of his UFC contract and became a free agent for the first time since signing with the organization over 15 years ago.

While it’s anyone’s guess as to what comes next for the Stockton Samurai, it has become quite clear that everyone is ready to be in the Nate Diaz business including David Feldman, the founder of Bare Knuckle Fighting Championship. The exec has gone on record saying that his dream match would be between the man from 209 and BKFC’s top star, ‘Platinum’ Mike Perry.

The former UFC fighter turned BKFC brawler recently appeared on ‘The Fighter vs. The Writer‘ podcast to discuss Diaz’s potential signing with the bare-knuckle fight group.

“My first initial reaction was, I don’t know if that’s where he’s going, where his ideas are,” Perry said. “Because he said he wants to go take over other sports, as far as he wants to be the [UFC President] Dana White of an organization, or the David Feldman of an organization, and run the show and show people how to do it. But he also said things where he’s still got a lot of gas left in the tank.

“He’s still interested in some big fights in his career, and I think that’s what it’s about. If he wants to accept the challenge, to challenge himself, he loves to box. I know he likes jiu-jitsu, too, so I don’t know if it would be something he would be fully interested in because, without jiu-jitsu against me and just boxing, I don’t know if he sees himself having a chance against me in the bare-knuckle boxing ring.”

With multiple organizations and the rise of mixed martial artists entering the world of boxing, fighters have more opportunities to make the most of their limited time competing in their prime. Two fights into his BKFC career and it appears that Mike Perry has finally found his true home in combat sports. After a successful debut against Ultimate Fighter alum Julian Lane at Knucklemania 2, ‘Platinum’ scored the biggest win of his career against Bellator MMA star Michael ‘Venom’ Page at BKFC 27 in London.

Already one of the promotion’s biggest names, Perry is banking a lot of money inside the squared circle, a fact that could appeal to Nate Diaz who, by all accounts, is looking to cash in on some big money fights before hanging up his gloves for good.

“It’s a real opportunity for anyone involved. It’s not just we’re talking about the sport. It’s real fighting and real money, so if you want that real sh*t in your life, come and get some of this ‘Platinum’ heat.”

Though Perry is more than ready to throw hands with the Stockton native, he made it clear that there is no animosity towards Nate Diaz.

“It’s a lot of respect there for Nate Diaz,” Perry said. “A lot of fans have said over the years that I’m kind of kin to the Diaz brothers, and that we have the same initial feelings toward fighting. When we’re fighting, it’s a real fight. All that friendly stuff, it doesn’t have to be there until the victor is chosen, and then we can talk about being cool. It’s no animosity. He’s a great competitor, and I am as well.”