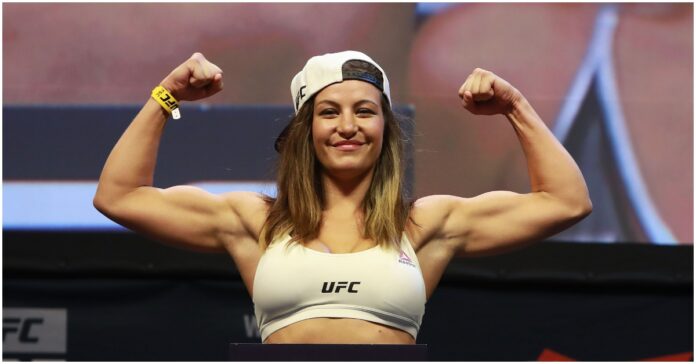 Miesha Tate is looking to dethrone the champion and number one woman’s pound for pound fighter Valentina Shevchenko, much liked Julianna Pena did to Amanda Nunes.

Tate first came back to try and reclaim her bantamweight championship she once had, but is now shifting her focus to another GOAT, Shevchenko. Shevchenko has dominated the Flyweight division and had her closest fight in quite sometime at UFC 275 against Taila Santos. She won that fight by split decision and an accidental head butt may have been the difference maker in the fight.

Tate returned to the UFC after a five year layoff and was defeated by Ketlen Vieira in her first fight back in the octagon. The bout was a close one, but unfortunately for Tate, she walked away the loser of the fight. After seeing her close friend take out Nunes in the biggest upset in UFC history, Tate shifted her focus and now has no intention of making another run at bantamweight.

“I would have loved to have a rematch with Amanda, but I feel like Julianna getting it done the way she did, I got my fulfillment from that,” Tate said on Wednesday. “Now, I want to take out the other GOAT.” (H/T MMAFighting)

Tate is looking forward to the move down to 125 and even believes it may even be a quicker road to a title shot in that division, compared to the 135 pound division.

“I said, ‘Well, which one’s going to get me to the title faster?’ He seemed to think that 125 was going to get me faster, and I said, ‘You know what? It makes a lot of sense.’ Julianna has the title right now at 135. This sets me up perfectly, and who wouldn’t want to fight Valentina with all that she’s accomplished.”