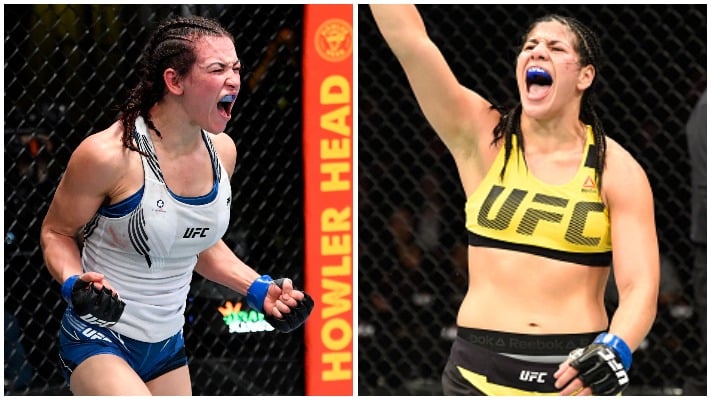 The scheduled bout between Miesha Tate (19-7) and Ketlen Vieira (11-2) has been now postponed.

‘Cupcake’ was scheduled to fight Vieira at UFC Fight Night on Oct. 16th. The former bantamweight champion is “doing ok” according to her manager Josh Jones after catching COVID-19. This is just the latest fight that has been affected by the ongoing worldwide pandemic. The fight was originally headlining the ‘Fight Night’ event, but now there is no solid date for the bout to take place.

Tate had her first fight in nearly 5 years this past July and she defeated Marion Reneau via TKO. The 35-year-old won ‘Performance of the Night’ for her win over Reneau as well. After being retired for five years, Tate wasted no time when booking her next fight.

Vieira has dropped 2 of her last 3 fights, including her last fight which she lost to Yana Kunitskaya via unanimous decision. Vieira started her UFC career 4-0 before hitting this recent rough stretch.

As of now, it is still unclear what will be taking the place of the Tate vs Veira fight to headline the event. Tate is a very popular fighter and a fan favorite in the women’s division and her comeback has caught a lot of fight fans’ attention.

Many fight fans remember Tate mostly for beating Holly Holm to become the UFC bantamweight champion. She would ultimately lose that belt in her first title defense against Amanda Nunes. Nunes is also known to be one of the best fighters ever and the greatest woman fighter of all time. ‘The Lioness’ still holds that title she beat Tate for back in 2016.

Fight fans everywhere are hoping Tate has a speedy recovery and is able to get back in the octagon soon.

Are you disappointed the between Miesha Tate and Ketlen Viera has been delayed?