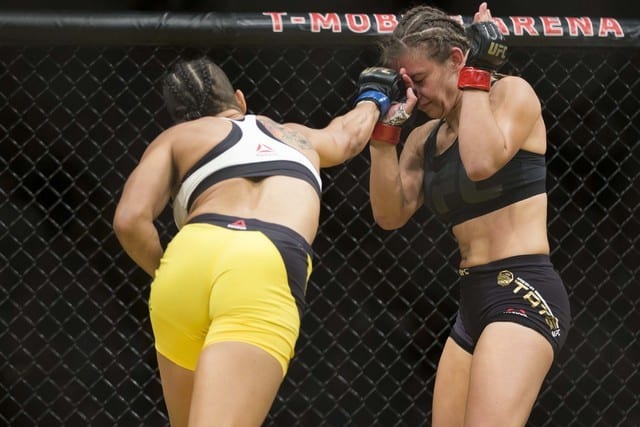 It’s unlikely that Cyborg has ever been an underdog heading into a fight but current bantamweight champion “The Lioness” just may be her toughest test to date. The two champions are set to collide at UFC 232 on December 29, 2018, in Las Vegas, Nevada.

“I obviously think Cyborg is going to win, she is the woman to beat and until I see something largely monumental going against Cyborg, she is pretty much going to be the one I always pick against any other woman on this planet,” said the now-retired ex-champion on a recent edition of Ariel Helwani’s MMA Show.

“That being said, Amanda hits like a man. I can say first-hand that she hits so hard. And it looks effortless, she is very natural at it. She’s got this falcon-like wingspan, it’s very long,” she added. “Cyborg may be surprised by how hard she gets hit by Amanda. I don’t believe Cyborg is going to want to walk through the punches like she does with every other female she’s ever fought. You’re not going to want to do that against Amanda. She might be smaller than you, but she packs one hell of a punch and she could hurt Cyborg.”

Does Nunes Have The Power

Cyborg has yet to be knocked out in 22 professional fights. As a matter of fact, you can count on one hand how many times she has been hit clean. Regardless, Tate believes Nunes can be the first women to sleep Cyborg.

“She has the power to knock Cyborg out, I do believe that. I don’t think it will happen this fight, but if Cyborg doesn’t actually come in with a strategy and just wants to bully Amanda, she might get hurt,” she concluded.

“”The Lioness” defeated Tate at UFC 200, rocking her with strikes before ending the fight with a rear-naked choke, unseating her from the top of the women’s 135-pound mountain.

Cana Nunes become the first women in MMA history to knock out Cris Cyborg? That remains to be seen, but Meisha Tate believes she definitely has the power to do so.

What do you think? Will Amanda Nunes become the first person to sleep Cris Cyborg at UFC 232?