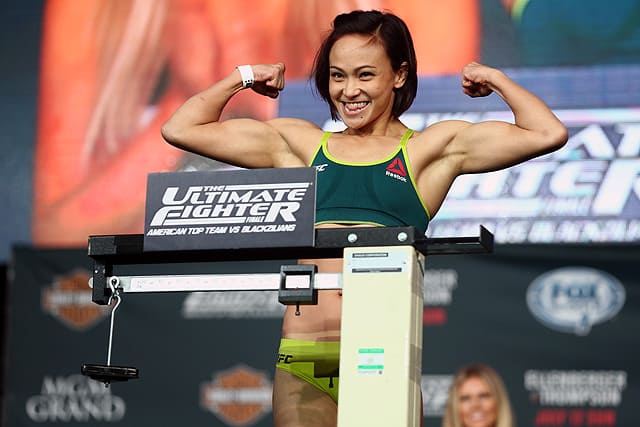 As if December 12’s UFC 194 wasn’t stacked enough, a pivotal women’s strawweight affair has been added to the anticipated pay-per-view (PPV) card from the MGM Grand Garden Arena in Las Vegas.

Tecia Torres will take on former Invicta FC atomweight champion Michelle Waterson in a battle that was assuredly earn the winner a spot among the top-ranked 115-pound females in the world.

The last woman to defeat Paige VanZant, No. 5-ranked Torres will look to rebound from her somewhat lackluster decision win over Angela Hill at June’s UFC 188 from Mexico City. The altitude South of the Border may have affected “Tiny Tornado” just as it did many fighters on the card, but the American Kickboxing Academy product will face her toughest UFC challenge yet in the “Karate Hottie.”

Waterson recently made her UFC debut with a one-sided third round submission of Angela Magana at July 12’s The Ultimate Fighter 21 Finale, a bout where the Jackson’s-Winkeljohn team member showcased all of the skills needed to be a world-class contender.

Well-known for things other than fighting, “The Karate Hottie” could be one of the UFC’s most marketable future stars. She made the logical move to the octagon after she surrendered her Invicta FC 105-pound title in an surprising upset loss to Herica Tiburcio.

She’ll look to improve upon her No. 11 ranking by taking out the tough Torres, adding to the overall intrigue and buildup of what could be the most-watched UFC event of 2015.

UFC 194 is headlined by the anticipated featherweight title unification bout between Jose Aldo and Conor McGregor, while middleweight champion Chris Weidman takes on Luke Rockhold in the co-main event.