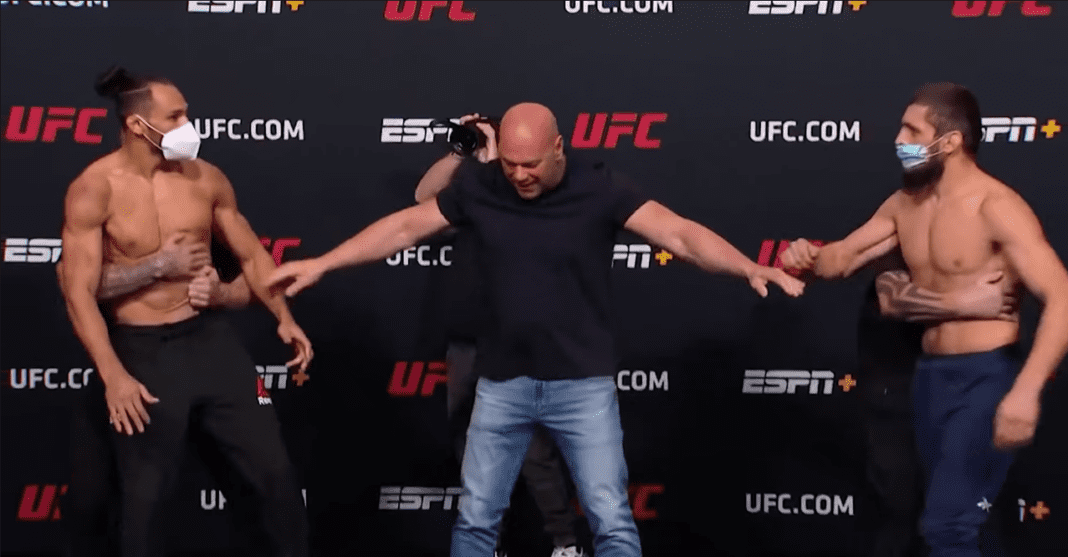 The next fight on the main card is between Michel Pereira Lima and Zelim Imadaev.

Round 1: Pereira opens with a front kick to the body before missing with a jab. The two continue to read eachother, before Pereira attempts to land a high kick. Pereira connects with a stiff jab. Imadaev puts on the pressure attempting to land a jab of his own. Pereira fakes a flying knee. Imadaev lands a low kick. Pereira gets backed to the cage and explodes with a jab. the two exchange as Pereira lands a flying knee on the break. He then lands a hard right hand before attempting a showtime kick that partially lands. Pereira continues the pressure landing a nice one two, he then backs Imadaev to the cage with a jab before knocking him down with a right hand in teh centre of the octagon. He continues to showboat before landing another one two. The right hand continues to land before Imadaev throws back a heavy low kick. Pereira lands a nice body kick before some showboating and closing the round with a knee.

Round 2: Pereira pressure Imadaev to the cage who lands a nice counter right hand. The two exchange front kicks to the body before Pereira attempts a flying knee that is stuffed by a low kick. Pereira attempts to roll into an up kick but is quick to return to the feet. Pereira lands some open-handed strikes. Imadaev attempts a takedown taking Pereira to the cage before having the position reversed. The two separate and Imadaev attempts a flurry of heavy shots. The two begin to trade in the center of the octagon. Pereira lands a heavy jab dealing with some visible damage to the nose of Imadaev. The final seconds of the round sees the two trade in the center of the octagon.