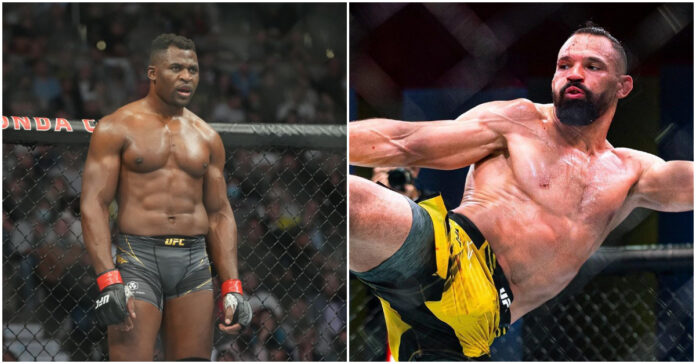 UFC welterweight Michel Pereira has fired shots at Francis Ngannou after their recent altercation at a hotel.

Pereira took on Santiago Ponzinibbio this past weekend at UFC Vegas 55. Serving as the co-main event on the night, their three-round bout was a close-fought affair that ultimately saw Pereira come out on top by a split decision.

Following his win over Ponzinibbio, the 28-year-old was in high spirits and wanted to celebrate after extending his win streak to five. He took to the fighter hotel to drink and cheer up with his mates post-fight but found himself in trouble with the reigning UFC heavyweight champion.

In an interview with Canal Encarada (via Ngannou_MMA), Michel Pereira talked about how he and his mates were in a cheerful mood. The group took to the hotel corridor to continue their celebrations but were inadvertently affecting their fellow behemoth.

“We celebrated my victory at the hotel, had fun,” Pereira said. “And we are such guys – we move only with music, we constantly light up, even when we cut weight. I always rock, and my guys are the same. Constantly moving noisily, having parties. Guerra was drinking there non-stop, everyone was joking, bantering. And our room was next door to Ngannou.

“And since the room was small, and there were a lot of people, someone suggested, ‘Let’s sit in the hallway?’ And we sat down in the corridor, and immediately came out to us – who would you think? Ngannou. The guys look at each other like that, ‘Wow, Ngannou is coming.’

“He comes up and says, ‘Hey, do you think it’s real to fall asleep when there’s such a noise? How do I sleep, huh?’ Honestly, at that moment I felt uncomfortable. I was after a hard fight, my nose was broken, my legs were beaten off. If Ngannou started a fight, what would I do to him? The team is already all drunk, they wouldn’t have helped me in any way.”

‘Demolidor’ confessed to his lack of desire for picking a fight with the man who has been recorded to have the strongest punch. Getting hit by Ngannou is equivalent to being struck by a Ford Escort at full speed. Although Michel Pereira obliged to his requests, he was not happy with how ‘The Predator’ conducted his behavior.

“Honestly, Ngannou made me angry,” Pereira added. “Why couldn’t he address us politely? He was lucky that I was all beaten up and couldn’t do anything, especially for a guy of this size. I don’t even want to think about it. I know he’s a modest, nice guy, but why couldn’t he tell us politely, ‘Hey, guys, could you …’ I didn’t like the way he spoke to us. You need to be polite to people.

“If he had addressed us politely, we would have retained respect for him forever. And so – we just fell silent. ‘What the f—k?! Do you think you can fall asleep with such noise?’ Bro, we were just drinking … You have to be polite to people. I could have answered him too, ‘Bro, go f—k. Who are you anyway?’” (h/t TalkSport)