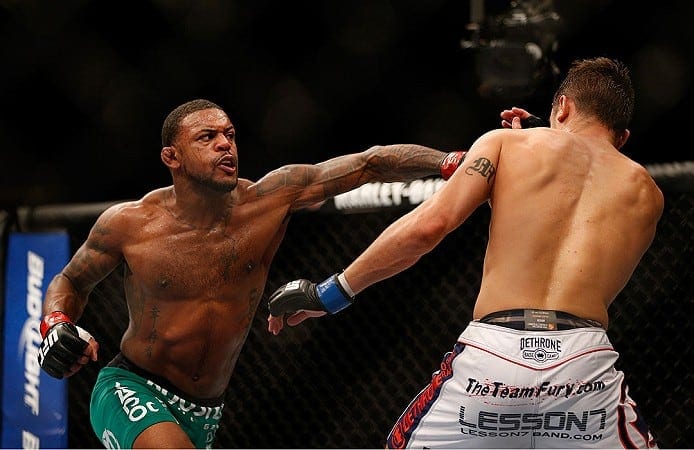 Michael Johnson will return to action at UFC on FOX 17 in December, with a 155-pound burner with Nate Diaz. The UFC kept their word in regards to giving ‘The Menace’ a big name fight after his robbery loss to Beneil Dariush, although Diaz’s ranking does not really come in to the matter. ‘The Menace’ will face the famed Stockton brawler at the Amway Center in Orlando, Florida, to round off the UFC’s explosive 2015.

The card will be headlined by the lightweight title bout, as Rafael Dos Anjos rematches Donald Cerrone, and Johnson feels like he already knows a fight with ‘Cowboy’ is inevitable. Cerrone comes in on a seven fight win streak, including three head kick knockouts and two submissions.

Speaking with MMAJunkie Radio, the Blackzilian’s lightweight believes Cerrone’s momentum will help him capture the title:

“I believe ‘Cowboy’ is going to take the title from (Rafael dos Anjos), I really do,” he said. “I’ve trained with ‘Cowboy’ – people say he chokes in big fights, but I think he’s on a momentum, and he’s going to ride that wave. I think me and ‘Cowboy’ are going to have to fight for the title pretty soon.”

The ever-active Cerrone has certainly been in full beast mode as of late, but he’ll face in RDA a dangerous grappler and striker that defeated him convincingly in 2013. On to the subject of Diaz, and Johnson believes that the 209 Gracie product is still a world class opponent as well as trash talker:

“He can’t help but talk sh-t,” Johnson said. “That’s what he does. I don’t have to hope that it’s going to happen. I can’t wait for him to start running his mouth. I’ll egg him on a little bit.”

The Diaz brothers have suffered a terrible run of form in recent times, with neither picking up a win inside the octagon for at least two years. It appears their gameplan of stalking down and slandering opponents inside the octagon is simply no longer effective.

Diaz last fought in December 2014 with a one-sided loss to current champ Dos Anjos, does he stand a chance in his Orlando bout with Johnson, or will this be the final nail in the bad boy’s storied career?