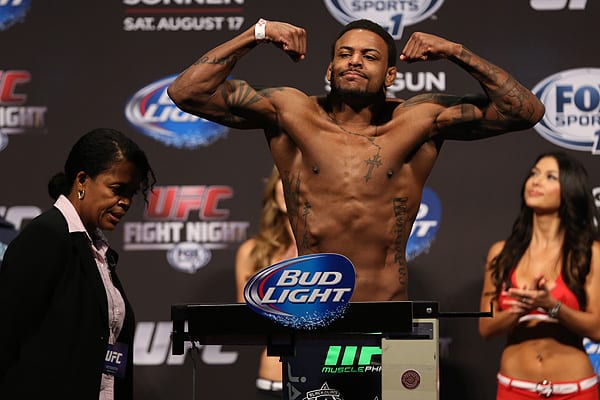 Michael Johnson misses weight for his scheduled featherweight showdown against Artem Lobov at the upcoming UFC Moncton event. This fight will serve as the co-headliner of the show.

The UFC held the official weigh-ins for this show on Friday morning (October 26, 2018), where all of the fighters took the scale to make weight. However, Johnson failed to do so for his short-notice featherweight scrap.

He weighed in above the 146-pound limit for non-title featherweight fights at 147 pounds while Lobov made weight at 145.5. As a result, he was not allowed to make another attempt.

The Fight Must Go On

Despite this bump in the road, the fight will still take place. However, it does mean that Johnson will be missing a chunk of change in his check for his performance at this show. Lobov will be awarded 20-percent of his opponent’s purse.

If you recall, Lobov had a different opponent at this event but got changed. Zubaira Tukhugov was removed from this fight for his role in the UFC 229 brawl between UFC lightweight champion Khabib Nurmagomedov and Conor McGregor.

Johnson enters this fight looking to continue his recent success as he’s just 1-3 in his four outings. He has suffered losses to names such as Khabib Nurmagomedov, Justin Gaethje, and Darren Elkins. However, he rebounded by snapping that three fight losing streak with a win. He was victorious over Andre Fili by split decision back in August at UFC Lincoln.

UFC Moncton (also known as UFC Fight Night 138) is set to take place on Saturday, October 27, 2018 at Moncton Coliseum in Moncton, New Brunswick, Canada. Volkan Oezdemir vs. Anthony Smith in a light heavyweight bout will serve as the headliner.