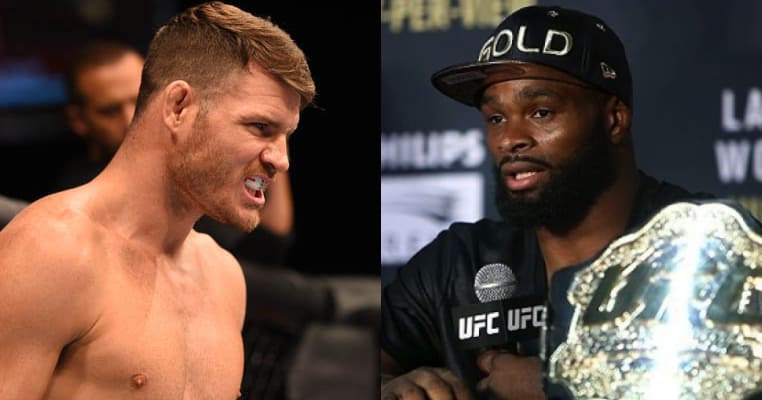 Two UFC champions who have shown a keen interest in ‘money fights’ may be facing each other in just that this spring.

Those two fighters are UFC middleweight champion Michael Bisping and UFC welterweight champion Tyron Woodley, who have both expressed interest in high-profile bouts with Georges St-Pierre and Nick Diaz. Woodley has also been rumored to face lightweight champ Conor McGregor for the 170-pound gold when ‘The Notorious’ returns from a break to welcome his first child into the world.

However, “The Count” and “The Chosen One” were spotted agreeing to a catchweight bout at 180 pounds sometime this May. If it sounds like a ridiculous proposition, watch the following video posted to Bisping’s Instagram account earlier today for proof that it’s real:

Welterweight champ @twooodley wants to throw down. Calling me out at the weekend. I’m down for whatever so if you wanna do it T-wood. Let’s go. @ufc @danawhite

Both men may not be in the best position to be calling for a super fight of any form right now, as Bisping only has only defended his title once in a controversial decision over retiring legend Dan Henderson at last October’s UFC 204 after he shocked the world by knocking out Luke Rockhold to win the belt at UFC 199, while Woodley has yet to secure his first defense after he fought Stephen Thompson to a draw at UFC 205 following his title-winning knockout of Robbie Lawler at UFC 201.

The fight is an out-of-nowhere proposition that fans may or may not want to see, because with the lightweight title on the shelf for the foreseeable future, it’s hard to believe the UFC would want to tie up the two divisions above 155 for a so-called ‘super fight’ between two champs that absolutely no one has called to see (or not involving McGregor, Diaz, and/or GSP).

What’s more still is that it’s clear Bisping and Woodley have both showed an extreme desire to talk their way into ‘money fights’ that may not make the most sense in terms of rank and merit, and as co-hosts on FOX Sports 1’s UFC coverage, they may be attempting to drum up a bit of attention to see if it’s a possibility that could bring them each another lucrative payday.

Is it a bout you’d pay to see?