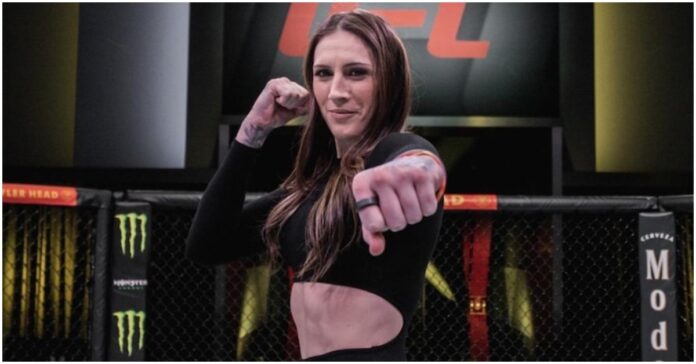 Megan Anderson (11-5 MMA) has taken to social media, where she finally addressed her fans on her MMA future.

The 31-year-old fighter hasn’t fought since losing to Amanda Nunes (21-5 MMA) by first-round submission at UFC 259.

Anderson has since been released by the promotion and is yet to decide when or where she will compete next.

“For all those that are asking and continue to ask me daily, I have no plans to fight right now. I’m not saying that I will never fight again, but at this point in my life, I’m loving everything else I’m doing. From gaming and streaming, working as an analyst for ESPN and Invicta, and currently filming my first major feature film, I couldn’t be happier and fighting really isn’t on my mind.

“I’m currently not affiliated with any gym. I’m not signed to any promotion right now and haven’t been pursuing a new fight contract. I appreciate the love and interest from everyone hoping to see me in the cage again, but hopefully this answers your questions for now.”

Can Megan Anderson still beat the best at 145ibs?

The Aussie competitor holds a 3-3 UFC record since signing with the promotion. The former women’s featherweight title challenger fought the likes of Holly Holm, Amanda Nunes, and Norma Dumont, where she served ‘The Immortal’ her first and only professional loss via a first-round knockout.

Since her loss to Amanda Nunes in March last year, it seems like Anderson is enjoying taking some time away from the gym to pursue some of her other hobbies.

If Megan Anderson was to return, what promotion should she sign for?