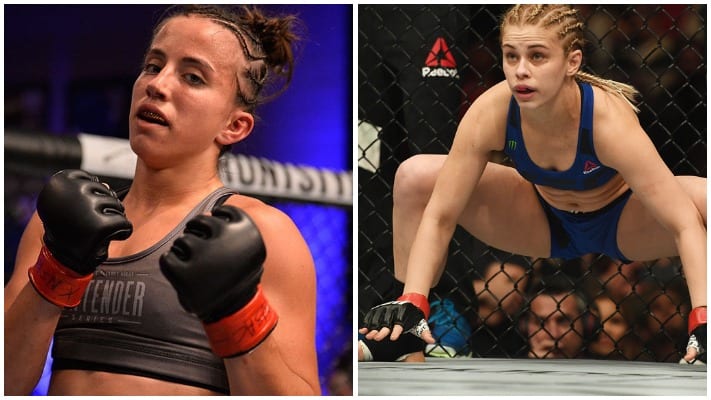 UFC strawweight prospect Maybee Barber hopes she gets to be the last opponent on Paige VanZant’s current contract.

VanZant currently has one fight remaining on her deal but speculation about her fighting future has increased. That’s because “12 Gauge” recently claimed she made more money with Instagram posts than she does fighting in the Octagon.

For Barber, that’s simply because VanZant isn’t fighting. Regardless, even though Barber is booked against Gillian Robertson next, “The Future” hopes to be VanZant’s next opponent:

“Now she makes more money outside than she does in fighting because she’s not fighting,” Barber said in an interview with The Score. “As far as her last fight on her contract, that’s my fight. If she wants to fight in Bellator, if she wants to move out, she can fight me on her last fight on her contract, or she can never fight again, and that’s up to her.”

VanZant recently responded to Barber’s callouts, stating that she found them disrespectful and that she wouldn’t reward Barber with a fight as a result. Barber believes it’s simply a case of her ducking opponents.

And if she continues to do that, she is not holding up her part of the deal with the UFC:

“I believe that, because that’s how she got that was because of the UFC,” Barber said of VanZant’s opportunities being a result of the UFC. “She would not be anywhere that she is right now without the UFC and what she’s done, and what they’ve given her, so she didn’t hold up her end of the bargain.

Hopefully this is the fight that happens next. That is, provided Barber gets past Robertson.

What do you think of Barber’s comments on VanZant?