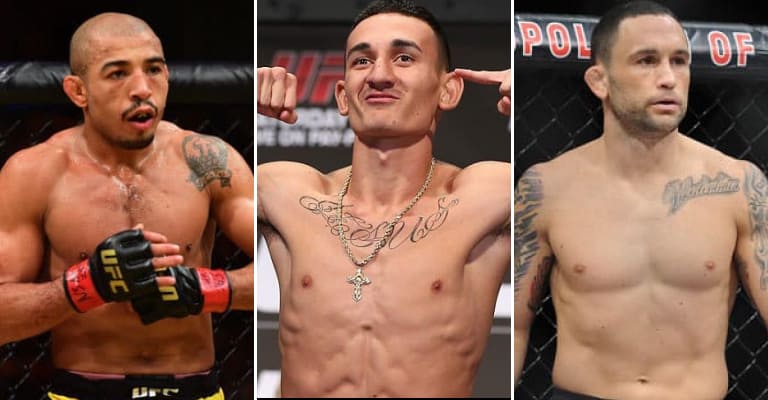 Max Holloway is without a doubt the best featherweight in the world in a division that has been notoriously deep with talent.

But even with perennial contenders Jose Aldo and Frankie Edgar now coming off of knockout losses, Holloway insists they’re still the top three in the division.

The 145-pound champion gave his thoughts on the status of the featherweight division and his unfinished business with Edgar (MMA Mania):

“Me and Frankie [Edgar] still got unfinished business. Everyone is talking about Frankie and [Jose] Aldo like they’re two dead guys. They say, ‘Too washed up.’ They’re still animals. They’ve been at the top of the heap.”

“They’ve been top-five, top-three in any division they were in, forever. People keep talking about how these guys are old; we’ll see. You can’t speak on it yet. It’s a couple losses. It’s MMA.”

“You get caught. Frankie, Aldo, these guys are not dead. They’re mid-30s and they’re fighting. People act like Frankie and Aldo are not the top-three guys. They’re still ranked in the top-three with [Brian] Ortega.”

Aldo was TKO’d twice in a row by Holloway himself, while Edgar was finished for the first time in his career at UFC 222 after blue-chip prospect Brian Ortega knocked him out in the first round.

Holloway appears to be addressing fans that have written off the two fighters:

“Come on, guys. Let’s be serious, let’s be real. These guys are not dead, they’re not gone. They’re still around. We’ll see what happens. But right now, the path is going a different way for me with Ortega and I’m focused.”

Edgar will look to bounce back quickly, as a rematch with Cub Swanson was just announced on Wednesday.

Do you agree with Holloway’s impression on Aldo and Edgar’s status in the featherweight division?