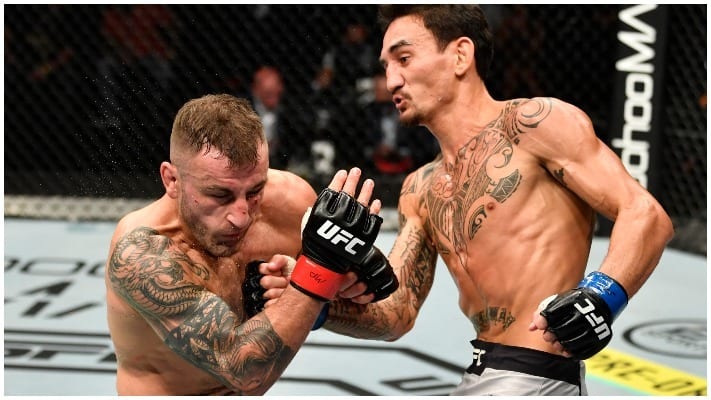 Despite losing on the scorecards, Max Holloway takes consolation in the fact that many in the combat sports world believe he defeated Alexander Volkanovski.

Holloway looked to regain his featherweight title in a rematch against Volkanovski in the co-main event of UFC 251 this past July. Things went off to a good start with “Blessed” dropping the champion in each of the opening two rounds.

While Volkanovski improved in the final three rounds, many still believed Holloway did enough to win the fight and regain his title. Unfortunately, two judges thought differently as Volkanovski ended up retaining his title in a split decision verdict.

Reflecting on the fight a couple of months later, Holloway stated how it didn’t matter if he thought he did enough. That said, the fact that most people thought he won certainly says something.

“It is what it was,” Holloway told ESPN (via Middle Easy). “Me personally, I don’t really think that it matters if I think I won the fight. I think it matters what most people think. Dana White doesn’t call me up after the fight and say ‘Hey kid, did you think you won the fight?’ That just doesn’t happen. It doesn’t matter what I think. But the UFC, you guys, the world, they can see 80-90% of the world thinks I won. That’s what matters to them, and that’s what matters to me.

“Whatever job you have, at the end of the day, what do you care about is what you’ve got to ask yourself. You care about the money, you care about the company, but what else? What comes to mind for me, is you care about respect and respect from your peers. After the fight, I could see my peers and what they were saying. They were sticking their necks out for me. These weren’t fans, they were fighters. They were actual other fighters. It’s Jorge (Masvidal), it’s Nate (Diaz), it’s Dustin (Poirier), Justin (Gaethje), the list goes on. It’s crazy, all these guys cannot agree on what color the sky is, but they all agreed on one thing that night.

“We got Firas Zahabi, Georges St-Pierre’s coach saying it, Big John. Everybody says ‘Big John is a referee,’ he’s not only a referee. He made the rules. This guy has classes for judges. This is the man. He has classes for these judges to take. He think I won the fight, and of course Dana White said what he said. So with all that being said, it’s hard for me to be mad. It is what it was.”

Given the nature of the fight, it’s certainly hard to deny Holloway a trilogy even with his two losses.

And with a pivotal featherweight meeting with Calvin Kattar set for January 16, a big win could put the former champion in prime position to get his second rematch with Volkanovski.

How did you score the rematch? And do you think Holloway should get a third meeting with Volkanovski?