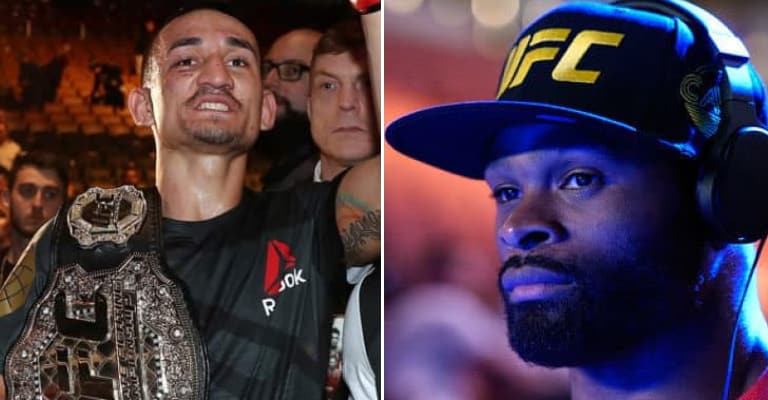 While he doesn’t have a title defense scheduled as of now, UFC 170-pound champion Tyron Woodley has been keeping his name in the headlines with his varied opinions on topics ranging from the rumored creation of an interim 170-pound title to boxing great Floyd Mayweather‘s chances in his rumored MMA debut.

‘The Chosen One’ thinks Mayweather could one day be successful in mixed martial arts, but many close to the UFC, including UFC featherweight champ Max Holloway, tend to disagree.

‘Blessed’ unveiled his feelings on the subject during a recent appearance on The MMA Hour, suggesting that the 41-year-old ‘Money’ wasn’t really going to fight in the UFC:

“In boxing, he’s greatest. There’s no hate towards him. He finished smart, he made a lot of money, he changed the sport in a lot of ways, and he got there using his brains and being smart … and not being humiliated.

“You guys really believe this guy is going to take an MMA fight, at however old he is right now, against a young guy that’s tough who people consider one of the best in the sport? It just blows my mind, man. If people believe that kind of stuff, it’s wild. I really don’t know what to say.”

For some reason, ‘Money’ has been rumored to make his UFC debut since he finished UFC lightweight champion Conor McGregor in the tenth round of their farcical, over-the-top boxing spectacle last August.

The all-time great kicked off that talk by posting a cryptic video of himself setting foot into an MMA cage and claiming he could sign a monstrous contract with the UFC.

Woodley fanned those flames by stating Mayweather would be successful in MMA on UFC Tonight, and he’s consistently kept up the talk on other shows like his own ‘Hollywood Beatdown’ on TMZ.

“Blessed” is a fan of “The Chosen One,” but he thinks the 1700-pound king is getting a little ridiculous with the hype, so much so that he wonders if Woodley is a UFC champion or a “TMZ reporter”:

“I mean, I love Woodley,” Holloway said. “Woodley’s the man. He’s a great dude, but I swear he talks about everything. He’s talking about everything. Whatever you can talk about, he talks about it. That guy is always on TMZ or something, so he wants to be talked about all of the time, that’s it. Woodley, you are the man, brother, but I think it’s a PR stunt.

“How can you not think it’s not a PR stunt? I don’t know. This guy is always — every time I see on Twitter something retweeting about TMZ, it’s Tyron Woodley talking about it. So it’s like, gosh, is this guy a champion or is he a TMZ reporter? What is going on, my friend?”

As he picks and chooses his opponent during a recovery from shoulder surgery, Woodley isn’t making any new fans even though he has, in reality, been one of the most consistent and active UFC champions over the past two years.

And even though Holloway claims he’s one of them, the featherweight champion may have a throng of fans who agree wholeheartedly with his callout of “The Chosen One.”