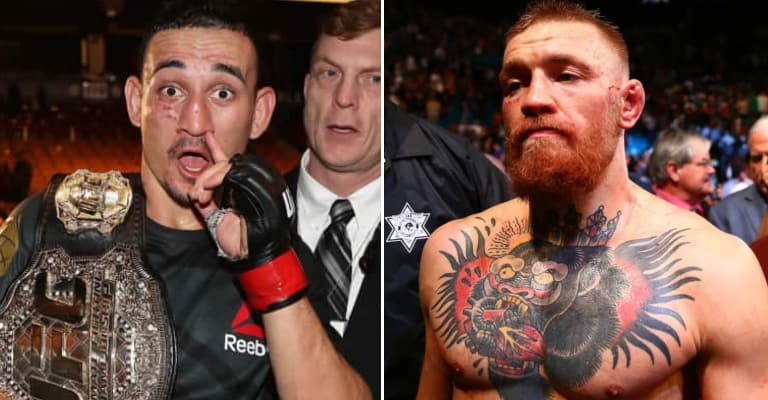 UFC featherweight champion Max Holloway picked up his second third-round TKO over Jose Aldo in one year when he stopped the 145-pound legend in the main event of last night’s (Sat., December 2, 2017) UFC 218 from the Little Caesars Arena in Detroit, Michigan.

After the impressive victory, UFC president Dana White hinted at a rematch between Holloway and former UFC featherweight champion Conor McGregor, who beat a 21-year-old Holloway way back at 2013’s UFC Fight Night 26. Since then, he’s won an unheard-of 12 straight fights, becoming one of the top pound-for-pound fighters in mixed martial arts in the process.

McGregor, on the other hand, won the lightweight title from Eddie Alvarez at 2016’s UFC 205, but was stripped of the 145-pound belt shortly thereafter and has not fought in MMA since after spending all of 2017 fighting Floyd Mayweather in boxing. Perhaps more importantly, he’s been involved in a series of concerning outside-the-cage incidents, jumping into the cage and pushing a referee at Bellator 187 before allegedly being involved in a bar fight with the Irish mob last weekend.

But that didn’t stop him from blasting Holloway after his win on Twitter earlier today as he posted a photo of “Blessed” after he defeated him:

I miss those sunglasses. pic.twitter.com/0fa7U9dM4Y

The featherweight champ wasn’t having it, however, as he rapidly fired back at McGregor by suggesting he missed the past because he was now “retired”:

Miss the sunglasses? I bet you also miss 2015 brother. Retired fighters love the past. pic.twitter.com/UWGnJG2KEe

McGregor has been tabbed for a potential title unification fight with interim lightweight champion Tony Ferguson, but even White admitted the Irish megastar may never fight again, and also that the UFC is currently in negotiations with McGregor on a new contract, in which he reportedly wants his own promoter’s stake.

That makes McGregor vs. Holloway II an unlikely bout at this point in time, but it’s hard to argue with Holloway’s suggestion at the same time.

Will we ever see McGregor in the Octagon again?