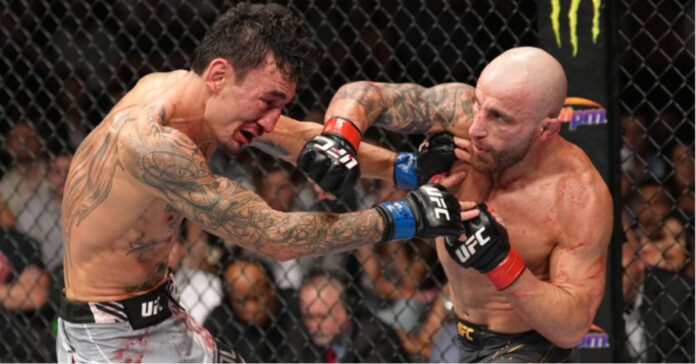 Off the back of his one-sided third championship fight loss to reigning UFC featherweight titleholder, Alexander Volkanovski, former division champion, Max Holloway has labelled the New South Wales native as the pound-for-pound king in the promotion – as well as urging him to chase lightweight spoils a division higher.

Co-headlining UFC 276 on Saturday night against Volkanovski, Holloway suffered a unanimous decision (50-45, 50-45, 50-45) loss to the defending champion, as the duo closed the curtain on their trio of title outings – with the former scoring victories against Holloway each time.

As technical as they come in modern mixed martial arts, Volkanovski took a close first round against Holloway at the T-Mobile Arena, however, seen a massive sway in the outlook of the fight after opening a nasty laceration on the eyebrow and eyelid of Holloway in the second frame.

Cruising to a one-sided triumph over the Hawaiin in another statement-making performance this year, the Australian received major props and plaudits from Holloway who addressed his loss on his official Twitter account.

“To all the fans do not cry for me Argentina,” Max Holloway tweeted. “This is part of life. We need to rebuild and we will. I love you!”

Following his one-sided trilogy victory over Holloway, Volkanovski called for a lightweight title siege against either Charles Oliveira or Islam Makhachev, with the division championship currently vacated amid a recent weight-cut mishap from former undisputed kingpin, Oliveira.

“Max Holloway is an absolute beast,” Alexander Volkanovski told Joe Rogan during his UFC 276 Octagon interview. “I just proved to you that I want to be in this Octagon as much as possible. I want to be busy. I want to move up and go for double champ and I’ll keep two divisions busy. Charles (Oliveira), whoever gets that belt, no disrespect. I’d love to move up, get that double champ status.”