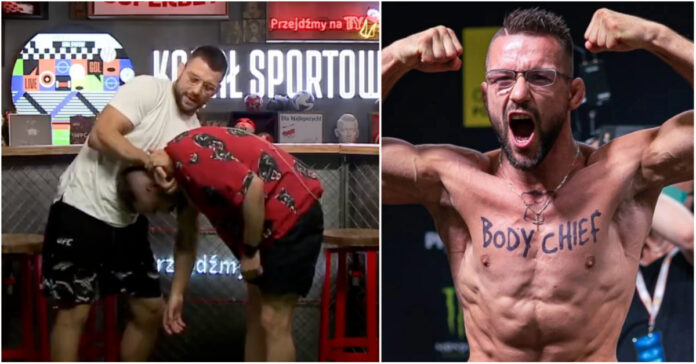 Maciej Turski had to tap rather quickly as Mateusz Gamrot put him in an elevated guillotine choke, which left the Polish host gasping for breath.

The two lightweight contenders fought last month in Las Vegas, Nevada, where MMA fans were treated to some of the highest levels of grappling and transitions as Tsarukyan and Gamort went the distance. Mateusz Gamort took him a close-fought unanimous decision victory as he rallied together late, winning the latter half of the fight.

This win boosted Gamort’s popularity not only among MMA fans but also among the casual audience, as they witnessed Gamort’s heart and grit and overall game. This prompted Maciej Turski to invite Gamrot onto his show, in order to demonstrate a few submission holds.

Perhaps the BJJ black belt went a little too far when he snatched Turski’s neck in a front headlock position, leaning back and elevating Turski off his feet, causing him to tap in seconds as he neared passing out.

But it seems like Turski was game as he played the part of a training dummy for multiple submissions. Gamrot no doubt had fun showing off his submission arsenal on the Polish host.

Apart from Hejt Park, we are likely to see Mateusz Gamrot attempting to choke out other people relatively soon inside the octagon as his win against Tsarukyan catapulted him near the top of the Lightweight division.