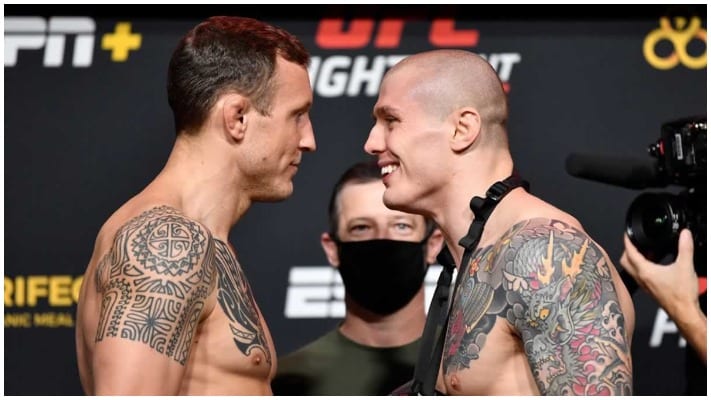 IT’S TIME! The UFC Vegas 16 main event is finally upon us. Jack Hermansson takes on Marvin Vettori in an intriguing clash between two of the best middleweights on the planet. Who’ll win? Let’s find out…

Round 1: Jack Hermansson opens up with a low leg kick. Marvin Vettori lands a left hand early. ‘The Joker’ is trying to stay on his toes and keep the distance but Vettori is enjoying success pushing forward and landing shots. The Italian is super aggressive early and is landing good shot but Hermansson is hanging with him and landing counter strikes. Vettori steams forward and eats an uppercut. Unfazed he continues to throw and drops Hermansson. Vettori tries to swarms with strikes and even threatens with a choke but his opponent survives. Just over a minute left on the clock and Hermansson is trying to work his way to his way back up but Vettori shuts it down by repositioning the head. He maintains top position until the final few second when Hermansson popped back up and landed an uppercut before the horn sounded.

Round 2: Hermansson lands with a right hand early. He’s aggressive at the start of round two and clearly wants to get that round back. ‘The Joker’ drops down for a takedown. He’s attacking it relentlessly and manages to sit Vettori down twice before the Italian hits the switch and reverses the position. Vettori is now sitting in his opponents guard. He’s not being aggressive on the ground and is content to maintain control rather than hunt for the finish or advance at all. Vettori gets back to his feet and is standing over Hermansson throwing kicks at his downed opponent who eventually stands up. Hermansson shoots in against the fence but immediately bails and lands a nice knee to the body. They break and he lands a kick to the body, Vettori returns with a upstairs before round two ends.

Round 3: Hermansson is really struggling to get anything going right now. Every time he moves into range Vettori pops him with something. Hermansson shoots for a takedown but the Italian has terrific defence and again avoids hitting the mat. Another attempt from Hermansson see both men fall to the mat awkwardly before popping back up. ‘The Joker’ lands a nice shot. He’s definitely looking a bit better in this round. Vettori is still throwing and landing hard shots though. Hermansson lands a big right hand but doesn’t follow up. Vettori goes to the body. Hermansson lands a straight shot as his opponent tried to lean out of range. A Hermansson jab seemed to get a significant reaction from Vettori who is circling on the outside waiting for the round to end.

Round 4: Vettori is aggressive at the start of round four after being told in his corner he dropped the previous one. Hermansson is meeting him in the middle though – things are heating up now. It’s so even on the feet right now. Both men are just trading up at the point. Every punch landed is immediately answered on both sides. Hermansson dips up a punch and comes back up with an overhand. Vettori just keeps popping out a straight left which just cannot miss right now. Hermansson puts a flurry of punches together. Uppercut, hook, and straight shots that combo had everything. Vettori answers back again and very clearly is the more heavy handed guy. A terrific pace throughout round four which for my money has been the best round of this fight.

Round 5: Vettori opens up with another one of those hard straight lefts. He’s really putting it on Hermansson early. ‘The Joker’ throws a wild four-punch combo. He’s showing lots of grit right now is certainly going down without a fight in this main event. They continue to trade up but Vettori lands the most significant shot. Another straight down the pipe. Without fans in attendance you can really hear the crack when he lands that shot. Hermansson is going for is now. He lands a hook and is egged on by Vettori before landing another. Just 90 seconds on the clock and he’s pressing the action. Vettori ducks under a punch and initiates the clinch. He pushes his opponent up against the fence. Vettori is content to ride of this position but referee Herb Dean is urging him to work. He drags the fight down and is forced to defend a heel hook attempt before round five ends.