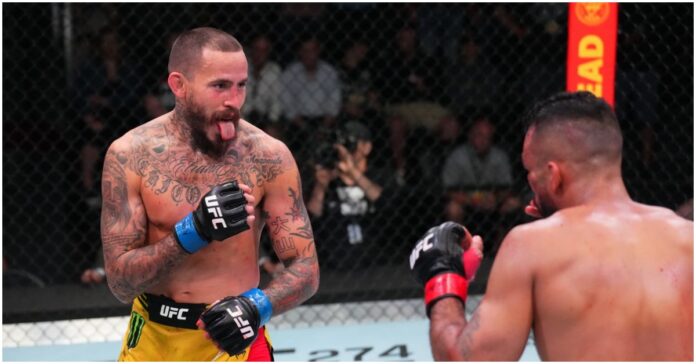 Following this weekend’s action, Marlon Vera has secured himself a top-five position in the bantamweight rankings, whilst Glover Teixeira overtakes Jon Jones in the pound-for-pound rankings.

The UFC Vegas 53 main event saw the slight underdog in Vera take on Rob Font, which resulted in ‘Chito’ securing the biggest win of his career.

Vera has shown vast improvements in his game as of late, resulting in a three-fight win streak, including a knockout victory over Frankie Edgar, and now a decision over Font. It wasn’t long ago that Vera was ranked around the No.15 mark, but now finds himself in the division ranked No.5.

Heavyweight Alexandr Romanov now finds himself in the top 15, after he outclassed America’s Chase Sherman. Romanov, who came into this bout as the biggest betting favrioute in UFC history, took no time to take down and submit Sherman; who had originally been cut by the UFC but was given the call on short notice. Romanov is now ranked No.13.

Current UFC light-heavyweight Glover Teixeira now finds himself No.8 P4P according to the UFC, knocking former opponent and divisional ruler Jon Jones to No.9

Jones, who once held the No.1 P4P spot, finds himself slipping further and further down the rankings, with his last win taking place in February of 2020. Since then, Jones had decided to make the transition up to the heavyweight division and has seemingly spent the time trying to add more weight to his frame.

It has been over two years since Jones has last entered the Octagon and it seems fans will be waiting longer. The most recent update has been that Jones was to take on Stipe Miocic, but seemingly Miocic needs until September and Jones is more than willing to wait.

What did you think of Marlon Veras’s performance on Saturday?