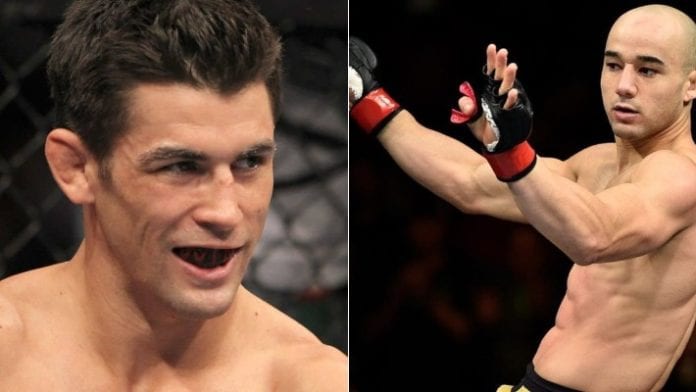 Marlon Moraes has no problem with Dominick Cruz getting the next bantamweight title shot.

Cruz is set to challenge Henry Cejudo in the co-main event of UFC 249 on May 9. It will be the former champion’s first outing since losing his title back in December 2016. Many have since questioned and criticized the UFC for allowing Cruz to skip more deserving contenders with Dana White recently defending the decision.

But when it comes to Moraes, he can’t be too mad at Cruz getting the shot. After all, he has a history with the division unlike a certain Jose Aldo.

“To be honest with you, it bothered me less than seeing Aldo get a title shot because Dominick Cruz has a story in the division,” Moraes told MMA Junkie. “Dominick Cruz won the belt, and he had so many problems with injuries.

“I’m a big fan of Dominick Cruz, too. I see him. I see the passion he has for the sport, and he just can’t get going. He just can’t stay healthy. He keeps getting hurt, and when you hear something like that, you can’t get mad, you know? I’m not mad at all, man.”

Before Cruz received the opportunity, Aldo was slated to face Cejudo for the title until travel restrictions prevented him from competing. That was despite Aldo losing a closely-contested split decision to Moraes in his bantamweight debut back in December as well as being on a two-fight losing streak.

Moraes wasn’t pleased with Aldo getting the shot at the time, but sees no problem with Cruz getting one more opportunity to regain his title amid all his injury problems over the years.

“The guy deserves to fight,” Moraes added of Cruz. “””He’s one of the best ever to step into that octagon in the 135-pound division, and I heard Petr Yan couldn’t get a visa to fight. He was one of the options, too, so why not? Why not give it to Dominick Cruz? He’s such a big name. I think it’s good for the division to have him back, and hopefully he can stay healthy, but if he can’t stay healthy, man, give this guy one more opportunity. Let’s see what he can do.”

Do you agree with Moraes?