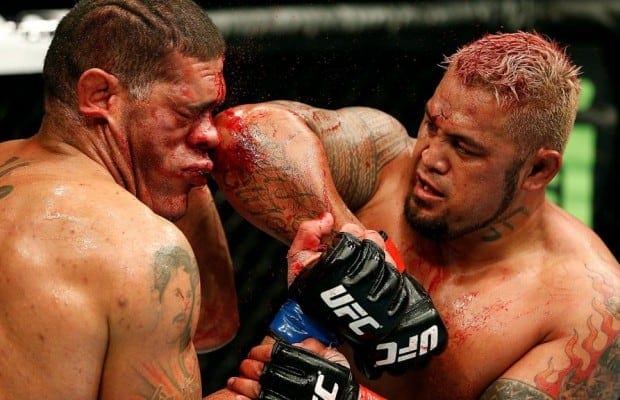 When Ultimate Fighting Championship (UFC) heavyweight sluggers Mark Hunt (10-10-1) and Antonio Silva (19-7-1) first met at UFC Fight Night 33 back in Dec. 2013, it was a war for the ages. Neither fighter walked away with a win due to a majority draw, however both men gained even more respect than they had before stepping inside the Octagon on that night.

Now, a rematch is set between “The Super Samoan” and “Bigfoot,” for UFC 193 in Melbourne on Nov. 15, 2015. This time, Hunt is expecting a different outcome. In fact, “The Super Samoan” says he will get the victory as early as the first round (via Submission Radio):

“It will end pretty quickly, I say. First round by knockout. First round. It’s a three-round fight I think this one, and I don’t think it’s going to go three rounds at all. And I already I started my pre-training way before, to help with Soa’s camp, and I’m just back home now. So I’m gonna be getting into my training and starting my camp in the next couple of weeks, three weeks. So I’ll be in tip-top shape, and I won’t make the mistake I did last time. I was up having to cut weight. So I’ll be fine.”

If Hunt has his way, he may be able to escape retirement talks for the time being. In his last bout, Hunt was decimated by Stipe Miocic back in May 2015 at UFC Fight Night 65. The fight was mercifully stopped in the fifth round.

Before that, Hunt had an opportunity to become the interim UFC heavyweight champion when he took on Fabricio Werdum in Nov. 2014. Werdum delivered a crushing knee to the jaw of Hunt and followed it up with ground and pound for the victory. “Vai Cavalo” is now the current undisputed 265-pound kingpin.

You can listen to the full interview below: