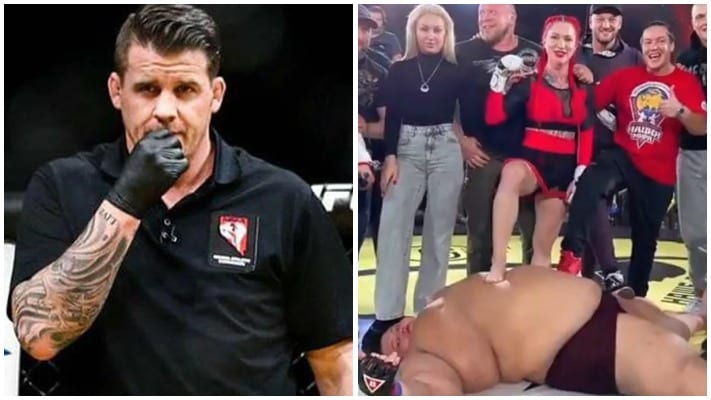 Veteran MMA referee Marc Goddard has labeled an intergender bout between a female bantamweight fighter and a 529lb man as “shameful, sickening and abysmal.”

A clip of Darina Madzyuk finishing Grigory Chistyakov in the first round of their fight in Russia went viral over the weekend. Despite giving up more than 390lbs to her opponent, Madzyuk was able to pick up a quick win at the event called “Our Business”.

The fight started with the 529lb man, Chistyakov pushing Madzyuk up against the cage. Then the Russian man can be seen attempting some kind of submission but eventually he failed. After Madzyuk escaped the submission attempt the referee stepped in to separate the fighters due to a lack of action. Once separated Madzyuk decided to let start throwing punches which led to Chistyakov being stunned. After some follow up punches from Madzyuk, her male opponent got knocked down to the canvas. Then, Madzyuk followed up with some ground and pound which then ultimately resulted in the Russian man tapping out from strikes.

Following his disappointing loss Chistyakov stated “After this fight, I will start to train actively, I will try to lead more or less a healthy lifestyle. Blogger Nastya Tuki-Tuk will be my coach.” When talking about the fight itself the 500+ pound man said, “It happened. She hit me fine and I fell. Although she is small … I lay on her back, but she did not fall, and than I didn’t know what to do.” (Transcribed by RT Sport)

Goddard took to social media to express his disgust at the contest, he wrote.

Do you agree with Marc Goddard? Is it shameful to host MMA fights like this?