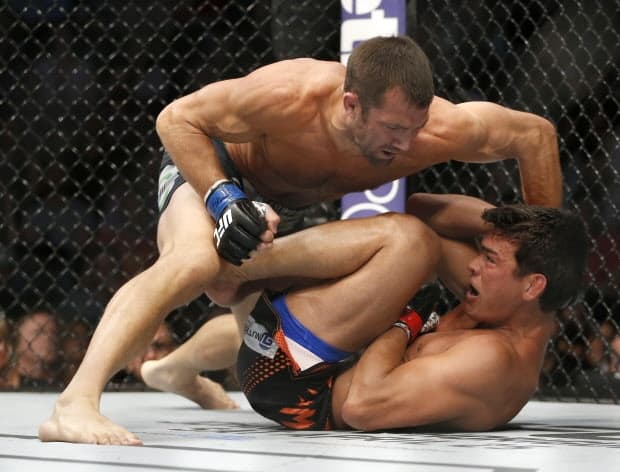 UFC middleweight contender and former light-heavyweight champion Lyoto Machida had his hopes for a rematch with Chris Weidman well and truly squashed at UFC On FOX 15. He faced surging former Strikeforce champion Luke Rockhold in the main event of the April 18th card in New Jersey, losing in the second round to a rear naked choke submission. For Rockhold, the win couldn’t have been any more decisive.

According to ‘The Dragon’ though, there is an unanwered question; was there an illegal strike by ‘Rocky’ in the first round? Machida believes so, and tells MMAFighting.com that an elbow to the neck impacted on his performance from the first round onwards, check it out:

“I’ve watched it maybe 3-4 times, that fight, I saw that I got an elbow on my neck, he elbowed my neck and I was so dizzy that time. Then, when I went to corner, I barely hear my brother, so when I got back to the fight, I was so dizzy, my legs were wobbly. I wasn’t recovered. So suddenly I fell again, and he was smart and capitalized.”

In rather similar circumstances in January of this year, light-heavyweight contender Alexander Gustafsson was knocked out after taking an alleged accidental headbutt against Anthony Johnson. Also much alike ‘The Mauler’, Machida isn’t trying to take credit from the AKA (American Kickboxing Academy) product’s performance:

“I thought that was illegal shot,” Machida said. “But, it’s not a problem because it’s a fight, something happens sometime. I think it wasn’t on purpose, but I think it happened, it made me bad.”

The karate master is now 3-2 since dropping to middleweight after a loss to Phil Davis, and faces explosive wrestler and striker Yoel Romero on June 27th at the Ultimate Fighter Brazil 4 finale. A loss to ‘Soldier Of God’ could well mark the beginning of the end of Machida’s 12-year fighting career, or at least the end of fighting towards a title shot.

Perhaps there was an illegal strike during the fight with Rockhold, but that’s not important now. The fact remains that after losing to ‘Rocky’, Machida is faced with an equally fierce and hungry contender in the form of Romero, and could well make a huge statement if he is able to bounce back from the loss against Rockhold. Romero is coming off a thrilling third round knockout win against Tim Kennedy at UFC 178, but will he be able to overcome the tricky style of ‘The Dragon’?