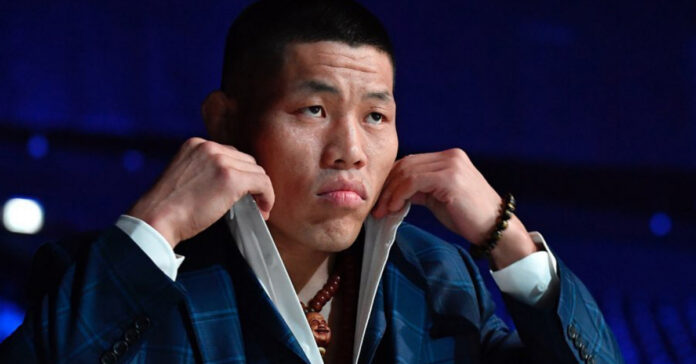 Li Jingliang is coming off an unfortunate split decision loss to Daniel Rodriguez at UFC 279.

This past Saturday, Jingliang faced Rodriguez after initially being scheduled to take on former interim lightweight champion Tony Ferguson. A weight miss from former rival Khamzat Chimaev risked the event from falling apart but Jingliang helped save the card by accepting an outing with Rodriguez, who came in ten pounds heavier, just a day before the fight.

Following the defeat, Li Jingliang made an appearance on The MMA Hour with Ariel Helwani

“I fought ‘D-Rod,’ almost ten pounds heavier than me,” Jingliang said. “But it’s not his fault because he made weight to fight Kevin Holland and it is not my fault either. I made weight. Both of us, we didn’t have options. At that moment I know why I’m here. I worked for this fight for months, myself, my coaches, my team, I know why I’m here. I’m here to fight.

“So, when they let me know that my opponent was going to be “D-Rod,” who’s ten pounds heavier than you, I said, ‘okay. No problem. Let’s fight.’ I trust my fist. I know this won’t be usual but more important than that, I know my mission here this time.”

Jingliang demanded an explanation for the result

“The Leech” shared his reaction to the announcement of the decision and called for the three judges to provide an explanation for their judging.

“When Bruce Buffer declared the result,” Jingliang added. “I couldn’t believe that. It’s already an awful matchup and the result was worse. I think it’s injustice. I can accept a loss, that’s fine, but please tell me why. Please, the three judges, tell me, why do you think I lost the fight.”