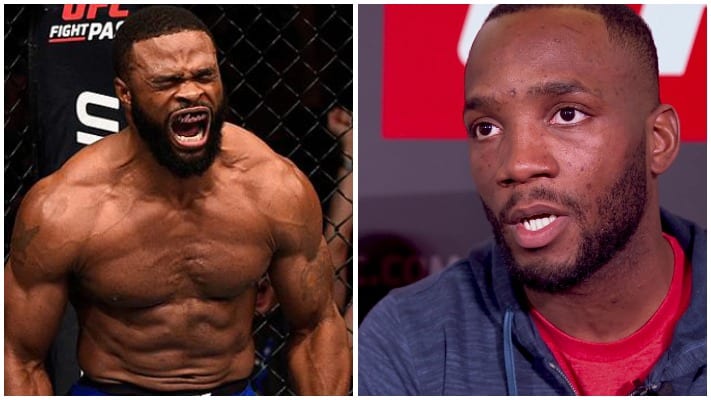 Leon Edwards looks set to return to the Octagon soon as he claims he’s been offered a fight with Tyron Woodley.

Edwards last defeated Rafael dos Anjos in July in an impressive unanimous decision victory and was campaigning for a title shot afterward. However, with Jorge Masvidal facing Nate Diaz this week at UFC 244 and current welterweight champion Kamaru Usman defending his title against Colby Covington at UFC 245 next month, “Rocky” has been in limbo for a while.

He even offered to be an alternate for both fights, only to be turned down by the promotion:

“When the fight got made, when Diaz vs. Masvidal [was made], I offered the UFC that I would stay ready just in case anything like this happened,” Edwards told SevereMMA.com (via MMA Fighting). “[UFC] said that, ‘No, it should be fine, you don’t need to.’ I kind of put all my focus into December, so I asked them again in case someone from Colby or Usman fell out, but they said no again this week.

“So, I’m aiming towards early next year probably. Woodley would be a good fight. Let’s just see how these next two fights pan out – Masvidal and Diaz, Usman and Colby – let’s see how they play out and then I want the number one spot, if not the title shot.”

Woodley vs. Edwards is a fight that’s been talked about a lot, especially with the former being the previous longtime welterweight champion. Edwards claims he was offered a fight with “The Chosen One” and that it would even take place as the co-main event for Conor McGregor’s proposed January 18 return.

While there is nothing signed yet, the Birmingham native is currently waiting for approval from Woodley’s side:

“If they give me Woodley, the talk is that it would be in America,” Edwards added. “They said to me this week that they offered Tyron Woodley the fight for January…the same date as Conor…the same card as Conor in January.

“They offered us that fight for the co-main, I said, ‘Yeah,’ and whatever, so [we’ll wait and see].”

Do you want to see Woodley vs. Edwards?