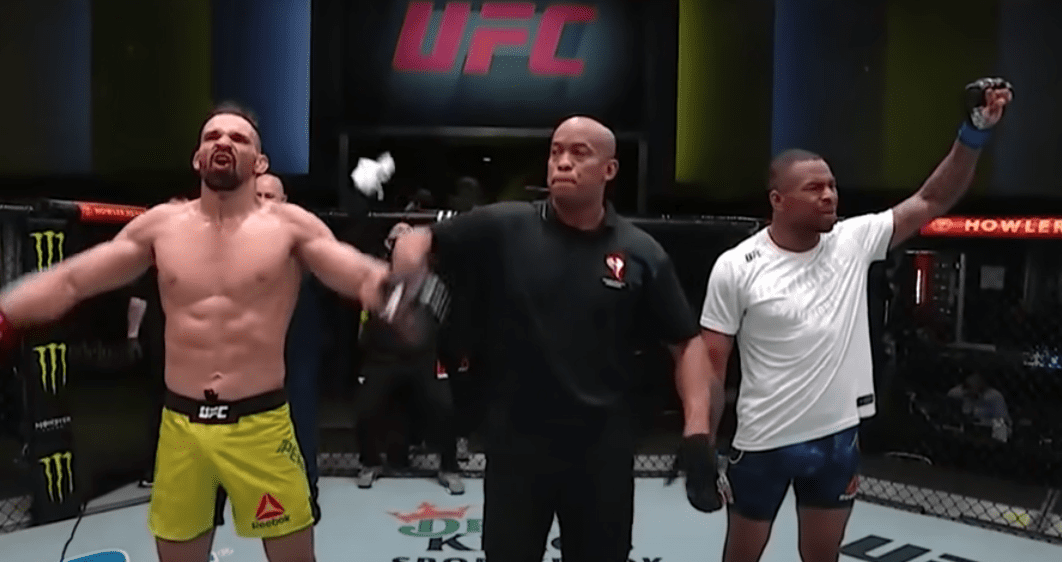 Khaos Williams took issue with the scorecards that led to his defeat against Michel Pereira.

Williams met Pereira in a highly-anticipated welterweight matchup on the main card of UFC Vegas 17 last month. It was a back-and-forth fight that saw both fighters land heavy shots but fail to get the finish as it went the full 15 minutes.

Both fighters felt they had done enough to win, but it was Pereira who ended up earning the unanimous decision victory. Williams — who was visibly shocked at the result at the time — reflected on the fight in a recent interview.

“At the end of the day, I wouldn’t have put my hands up if I didn’t think I won,” Williams told MMA Fighting. “When it boils down to it, I got a high fight IQ, too. In the fight, there’s always room for improvement, so there’s things I could’ve done better. I’ve watched the fight over and over again. I’m my biggest critic.

“The main reason I felt I won is because I held the middle of the cage. I was bringing the fight to him, and it’s not as easy as it looks being in there. When you have somebody dancing around and staying on the outside, it’s a little harder to dial in and really get off when somebody’s running away from you, when they’re not bringing the fight to you. Now, I became the aggressor, but it was more me counter-punching because I didn’t want to look sloppy when he danced around the cage.

“I won because I’m the one bringing the aggression. I wasn’t as aggressive as I usually am, because I was taking my time and he was moving a lot. It’s a fight and everybody’s got a puncher’s chance in a fight. But I controlled the middle of the cage and I won every exchange. Every time he hit me once, I probably hit him three times. I feel like I won.”

All three judges scored the first round to Williams while the final round was given to Pereira.

Williams had no problem surrendering the third round — his issue was with the second round being scored to the Brazilian.

Despite what was his first loss in the UFC, Williams is looking to bounce back in the new year.

“I definitely [feel like I’m the better man],’ Williams added. “There’s definitely room for improvement. Stop that takedown, boom. I wish I had a little more volume, used my footwork to get in a little bit better but that’s really about it. He didn’t do nothing.

“It’s a minor setback for a major comeback. I stay encouraged, not discouraged. I’m a winner and I hate the feeling of losing. I’m a man, but I hate the losing feeling more than I love the winning feeling. It makes me even hungrier. It’s not that I lost the fight in general, because I really didn’t lose. I’m still confident. I still believe in myself and this God-given talent. I look at it as I lost a chapter in my legacy, in my book.

“This year was supposed to end great the way it started great, but this is just the beginning of my career and I’m getting ready to start racking these wins up.”

Do you think Williams defeated Pereira?