LowKickMMA.com
Home MMA News Khamzat Chimaev and Darren Till Party and Train Ahead of UFC 273 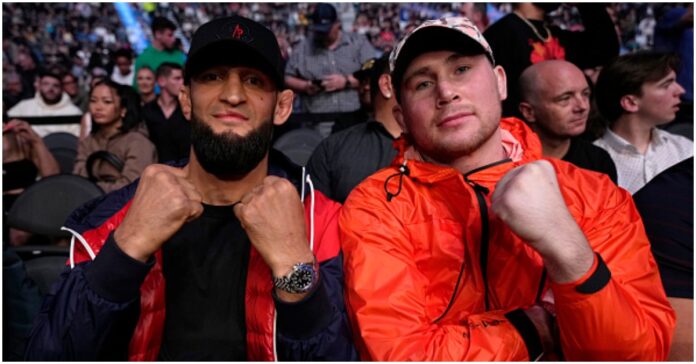 The bromance between Khamzat Chimaev and Darren Till continues to blossom, as new training footage shows the iconic duo sparring and having a few drinks ahead of the eagerly anticipated event that is UFC 273.

Chimaev and Till have been going viral with their wacky friendship, and a plethora of hilarious videos have surfaced depicting the two training and goofing around. Nothing’s changed, as one of the latest videos gives fans a comedic glimpse at the training of Khamzat Chimaev ahead of his Gilbert Burns fight.

The video by Blockasset shows Darren Till warming up, and soon transitions to Chimaev and him lightly sparring and grappling. Later, the footage shifts again to a solo shot of Till sitting in the cage after going a few rounds of sparring.

“He’s doing his pads. We just rolled a bit… we just went over some drilling techniques,” Till started off, breaking down the training so far. “I was imitating Gilbert (Burns). I know I’m tall, but I was trying to imitate Gilbert (Burns) as much as I can…”

“It’s good to make new relationships. Honestly, I just think it’s a dynamic duo, it’s just the way we click,” Darren Till told the crew. “Even on camera, we’re not trying to be funny for the camera. We’re just two f*ckin mad psychopaths together.”

The training would continue, featuring some grappling, and scenes of the fighters ripping pads with punches and kicks. Eventually, the day would turn to night, and they’d go from the gym to back home. Drinking and relaxing would ensue from there. Featuring some shooting of pool, shots of liquor, and overall funny shenanigans from Chimaev, Till, and the crew.

Outside Chimaev would get in some more late-night training, doing what he called his fifth training session of the day. Skipping rope at midnight, he was in good spirits.

“Come to Dubai, Khabibi,” He laughed, still skipping rope. “I am the champ. I am the king. I am the best ever. Better than everybody. Smesh everybody. Nobody’s like me!”

What are your thoughts on the training of Khamzat Chimaev, could he have strayed too close to running the risk of overtraining ahead of this Gilbert Burns fight at UFC 273?