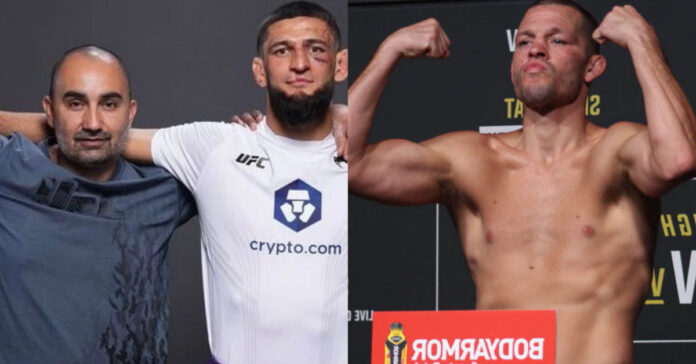 Chimaev was slated to take on Diaz in the headlining bout this past Saturday. However, he needed to get matched up with former rival Kevin Holland for a catchweight fight after he came in seven and a half pounds over the agreed limit at 178.5 pounds. Chimaev racked up another dominant first-round finish over Holland, taking no damage in the process.

In an appearance on The MMA Hour with Ariel Helwani, Andreas Michael of Allstars Training Center and head coach of Chimaev explained what went on behind the scenes and gave his take on why Chimaev missed weight.

“We started this camp heavy,” Michael said (transcribed by MMA Fighting). “That’s what the problem was as well. We got an offer to fight Nate Diaz, and it was earlier than this in August. It was too soon because he was heavy. Then they moved it 10 days up, and I believe we just started too heavy this camp. We should have had a little more discipline and held our weight to a reasonable level, to a reasonable weight close to the one that he’s training at and going into camp. That’s basically about it.

Michael further took responsibility for the weight miss and issued an apology to Diaz for the change in opponents.

“We can find a lot of reasons and excuses and all this. At the end of the day — I’m not slagging off Khamzat, he’s a magnificent fighter and I love him to death — but what I’m saying is that it was absolutely unprofessional from our side not to make weight. Anyone who doesn’t make weight is unprofessional, absolutely. I want to [apologize] to Nate’s camp for that. We should have both made weight, and there are no excuses.”