LowKickMMA.com
Home UFC News Punches fly as Khamzat Chimaev and Abubakar Nurmagomedov get into a physical... 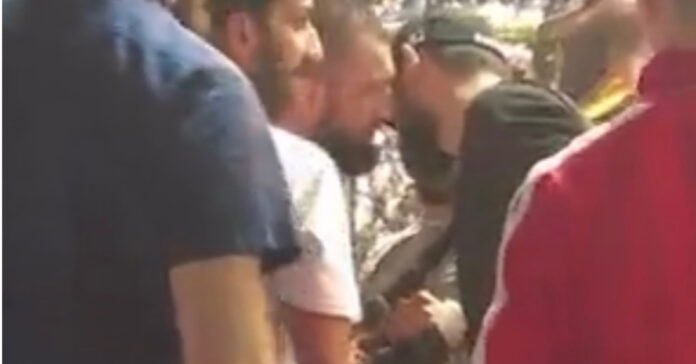 Khamzat Chimaev and Abubakar Nurmagomedov throw punches at each other cage side after the main event of UFC 280.

Just moments after Islam Makhachev won the lightweight championship at UFC 280, Chimaev and Nurmagomedov threw punches at each other cage side.

At first glance, it looks as if Chimaev either pushes or jabs Nurmagomedov. Nurmagomedov tries to land a haymaker on Chimaev and the two had to be separated. Chimaev has an “anybody, anytime” type of attitude when it come to fighting, so it’s not too surprising that tempers flared when the two came face to face.

Khamzat Chimaev has been under fire from the Nurmagomedov camp recently, as Khabib Nurmagomedov had called him out for not having “true muslims” around him.

Khabib Nurmagomedov called out Chimaev after he missed weight at UFC 279.

“If you are a Muslim, you should have good people around you – Muslim who can say, ‘Hey, don’t do this,” Khabib Nurmagomedov said at a Human Appeal event recently. “I recently watched the weigh-in of Khamzat Chimaev. I followed what was happening with his weight and looked at his team. There are no Muslims around him and this is very bad. Because if you are a Muslim, you need good, strong people around you. [Who] will say, ‘Come back, do this.’” Khabib Nurmagomedov said.

This may have been what caused tempers to flare at UFC 280, as Chimaev didn’t take the comments too lightly. He threw a few shots back at ‘The Eagle’ over his comments.

White didn’t take the altercation between the two that serious, as he just chalked it up to “fighters being fighters”.

“You know, what do I even say about that? It happens, especially with him.” White said laughingly.

What do you make of Chimaev’s cage side scuffle with Nurmagomedov?

READ MORE:  Demetrious Johnson reveals $60,000 payday for UFC title defense: 'That's where the chip on my shoulder came from'