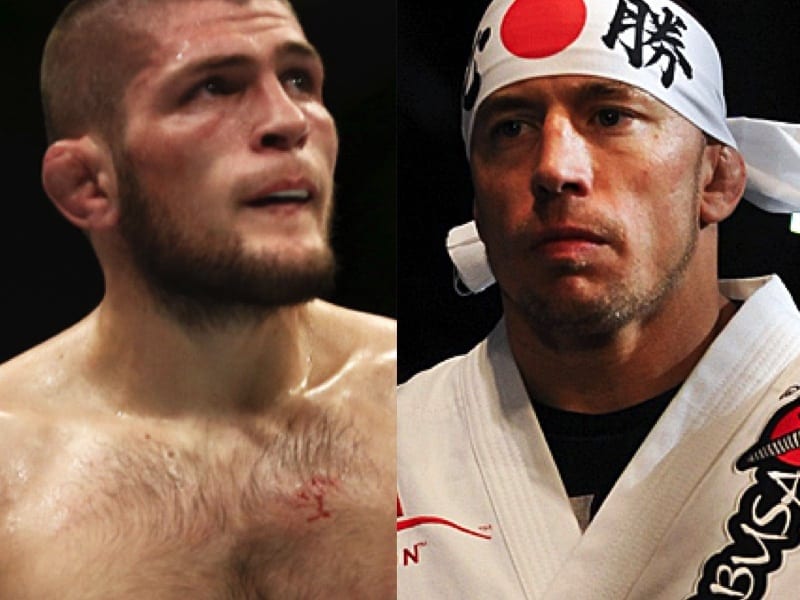 “The Eagle” currently holds an undefeated record of 27-0. His latest victory came over Conor McGregor in October. He defeated the Irishman via fourth-round submission by way of neck crank. However, after the fight Khabib was involved in a brawl against McGregor’s team.

As a result, he can’t be booked in another bout until punishments from the Nevada State Athletic Commission (NSAC) have been handed out. In the meantime, the 155-pound champion recently did an interview with Submission Radio to talk about his future. Khabib has long been linked to a dream match against former UFC welterweight and middleweight champion Georges St-Pierre.

Many believe “GSP’s” wrestling could prove difficult for Khabib inside the Octagon. The Russian admits a fight against the Canadian would be very tough, which is why a fight with him would have to happen at 155 pounds (via MMA Fighting):

“For me it’s like a smart decision taking him to 155. He’s a very big challenge for me. Like, for my legacy, he’s a very good match-up for my legacy, for fans, for money, for everywhere now.

“I don’t know about his future, about his plans, but I respect him. In my opinion, he’s the greatest athlete who ever competed in the UFC, because he’s a champion inside the cage and outside the cage too. We’ll see.”

In regards to his wish list of fights, Khabib had three big names right off the bat:

“I don’t know right now,” Khabib said. “Why not maybe St. Pierre, Ferguson and Mayweather, it will be these three guys and we can retire and become the greatest athlete of all time.”