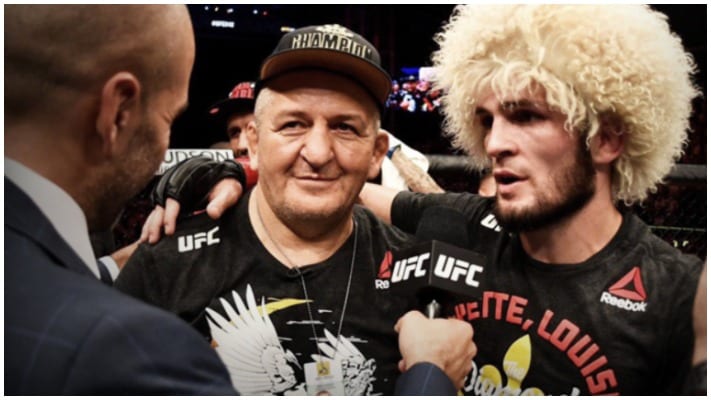 As we all know by now, the father of UFC Lightweight Champion Khabib Nurmagomedov, Abdulmanap Nurmagomedov, passed away earlier this month. He ended up contracting Covid-19 in late April, and many complications came about considering. His kidneys were failing, his heart, his brain, he’d had two strokes, he’d gotten pneumonia, things really weren’t looking good for him. His body ended up fighting off Covid-19, but the other complications that came from it, primarily the strokes, left a severe, fatal impact.

Nurmagomedov was in a coma for much of his time inside the hospital, but he awoke about a week before passing. His son, Khabib, would go to sit by his fathers gurney and hold his hand, tell him that he’s been training every day, that he’s praying to Allah to make him better, and he said he could tell that it made his father happy to hear he was doing what he needed to be doing in order to improve and evolve himself.

It’s such a tragic thing, not only because one of our favorite fighters lost his father, but because of what his father was to him. He wasn’t only his father, he was his coach for his entire life, and the coach of many, many young Dagestani fighters. He was an incredibly respected man in Russia, a true combat sports genius. Khabib also lived with him, with his wife, and his two kids, given the fact that he’s the youngest of his fathers kids. The UFC Lightweight Champion had the following to say about the matter earlier today on social media:

Khabib debuted in the UFC back in January of 2012, and he went 11-0, dominating everyone he fought, winning, and defending the UFC Lightweight Championship, all without his father in his corner due to visa issues. Finally, at UFC 242 back in September of last year, his father was allowed to be in his corner considering the fight was in Abu Dhabi. It’s truly a beautiful thing that was able to happen now that he’s gone. He got to see his son defend his title against one of the most dangerous talents in the sport firsthand.

Abdulmanap Nurmagomedov made it to 57-years-old. He was born on December 10, 1962, and died July 3, 2020. He will certainly be missed, it’s a wonder what his sons career will look like without him. Khabib is still adamant about fighting Justin Gaethje before the years end, but it won’t be at UFC 253 like originally planned. We’ll have to wait and see how this whole thing pans out.

Everyone at LowKickMMA continues to send our condolences to Khabib Nurmagomedov and family during this difficult time.