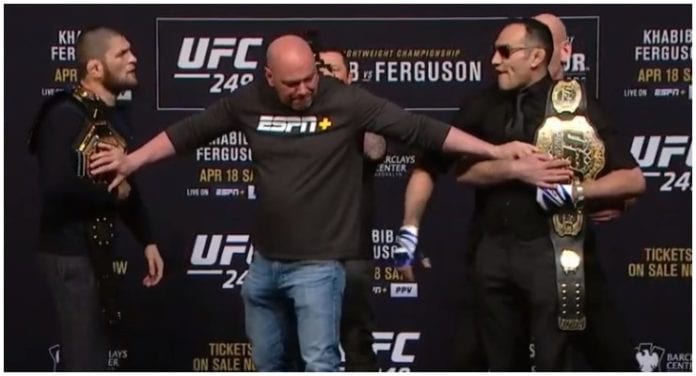 It looks like Khabib Nurmagomedov and Tony Ferguson’s rivalry will be taking a backseat for the moment.

The dream fight between the pair will no longer be taking place for the foreseeable future following Justin Gaethje‘s fifth-round TKO win over Ferguson in the UFC 249 headliner last night. As a result, Gaethje became interim lightweight champion and will now go on to face Nurmagomedov later this year.

Nurmagomedov appeared shocked more than anyone else — at least going by his initial reaction to the fight’s conclusion — before he congratulated Gaethje soon after. And although his rivalry with Ferguson did get heated at times, he sent out a message of support to his old foe.

“Whatever happened is in the past,” Nurmagomedov tweeted on Sunday. “Heads up Tony, I hope everything is good with you and your family. When your son grow up, he’ll be proud with you. @TonyFergusonXT”

It isn’t the end of the world when it comes to seeing a Nurmagomedov vs. Ferguson matchup. After all, even just one win could see “El Cucuy” enter title contention again.

However, given that the fight has failed to come to fruition five times while Conor McGregor has also been campaigning for a rematch with Nurmagomedov, the chances of it happening appear more slim than before.

What do you make of Nurmagomedov’s message for Ferguson?