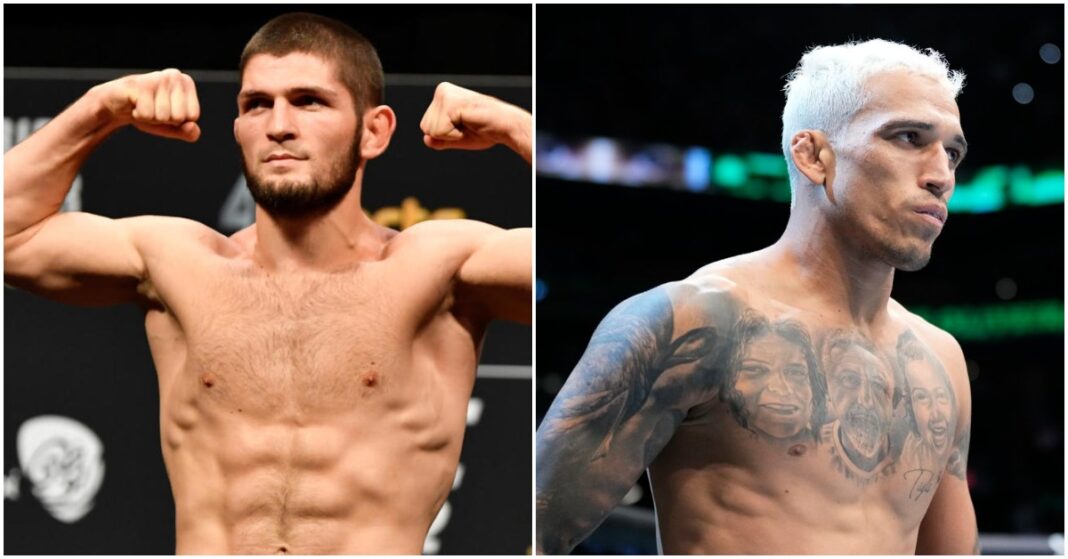 Former UFC lightweight champion, Khabib Nurmagomedov has stated that Charles Oliveira has no ground game, despite the Brazilian being known as one of the most lethal submission grapplers in the promotion.

It seems as if the rivalry between Charles Oliveria and the Islam Makhachev‘s camp seems to be heating up. Nurmagomedov, a long-time friend and training partner of Makhachev continues to take aim at Oliviera, all while bolstering Mahkavhevs title shot claim.

In an interaction with Henry Cejudo and Kamaru Usman at an Eagle FC event, ‘The Eagle’, while explaining a technique, he turns directly to the camera to the camera, to proclaim a Makhachev victory.

“This is what Islam is gonna do to Charles Oliveira,” Nurmagomedov said. “He is gonna ride him. You understand what I mean, like how you ride a horse, he is very good on this.

“Just save this video because a lot of people underestimate Islam, they think Charles Oliveira has ground game. He don’t have ground game, if you tap eight times in UFC, how can you say you have ground game?”

“You tap eight time, you understand?”

Khabib Nurmagomedov Is Not Impressed

Although there has been online speculation that some of the remarks put out on social media targeting Oliveira were not Khabib Nurmagomedov, but instead of the work of someone on his team, the Dagestani native really does seem unimpressed with the Brazilian.

“Nobody ever touched my face, and all the time he go down, people cannot compare me vs Charles Oliveira, he tap in UFC eight times.”

Ever since he has retired, there has always been speculation about the return of the former champion, but now, it has the possibility of heading that way.

If Oliveira and Makhachev do face off for the vacant title, which appears to be the direction UFC president Dana White is angling towards, what if Oliveira beats Makhachev? Could we see Khabib Nurmagodemov make a return to avenge his friend?

What do you think of Khabib Nurmagomedov’s comments?