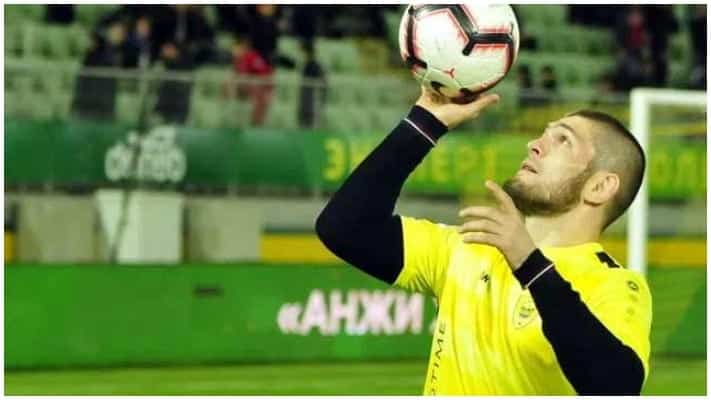 Khabib Nurmagomedov has looked to clear up reports about him signing a contract to play football for FC Legion Dynamo, who currently ply their trade in the third tier of Russian football.

Nurmagomedov doesn’t have any formal soccer experience but has played since he was young in Dagestan. Since retiring from MMA in October 2020, ‘The Eagle’ has expressed an interest in playing football at a professional level.

FC Legion Dynamo appeared to have made Nurmagomedov’s dream come true when they took to social media to announce he’d signed on with the club.

“A great battle awaits our Legion, for which we need great warriors,” FC Legion Dynamo posted. “Getting ready to host [Khabib Nurmagomedov] to our team.”

“Tried to confirm this report of @TeamKhabib signing for a Russian soccer team with @AliAbdelaziz00,” Morgan wrote on Twitter. “He said there was ‘absolutely no truth’ to the report and labeled it ‘completely fake news.’”

During a recent Gorilla Energy press conference, Nurmagomedov cleared up the confusion surrounding his footballing future, he said.

“I have friendly relations with Legion Dynamo. I support the team and come to their matches when I’m in Makhachkala, but I have no plan to step on to the field because I fly more than I walk right now.

The former undisputed UFC lightweight champion refused to rule out playing for FC Legion Dynamo at some point.

“I haven’t signed the contract but I have close relations,” Nurmagomedov added. “I can come in at any time. It all depends on the situations, we’ll see how it goes. They’ll have a cup match soon, I believe they’ll be playing Russia’s Premier League team from UFA. If the Premier League comes maybe I’ll… but I have to lose a little weight to get into football shape. Maybe 12 pounds.” (Transcribed by Sportskeeda)

Do you think Khabib Nurmagomedov will ever play for FC Legion Dynamo?