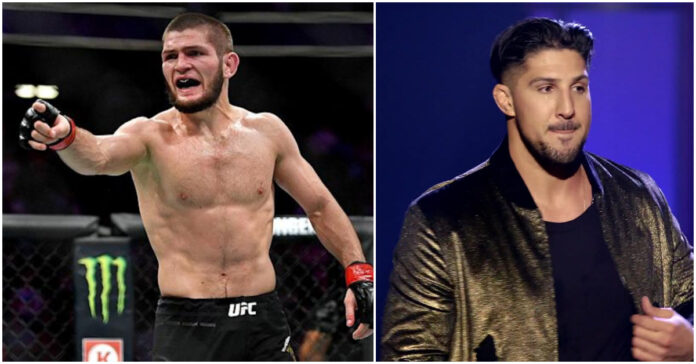 Former UFC lightweight champion Khabib Nurmagomedov called for top welterweights to refuse to fight with Colby Covington based on his disrespectful trash-talking.

Nurmagomedov made headlines when he shared his thoughts on the alleged physical altercation that took place between Covington and Jorge Masvidal last week. After losing to Covington in a one-sided affair, their bitter dispute was far from over for ‘Gamebred’ who chose to attack ‘Chaos’ outside a steakhouse in Miami.

Masvidal was arrested after the incident and faces criminal charges against him. The undefeated Dagestani fighter took issue with his arrest and believes Covington should not have pressed charges.

In a recent episode of The Schaub Show, former UFC heavyweight contender Brendan Schaub expressed his sharp disapproval of Khabib Nurmagomedov’s comments suggesting that the UFC legend should come out of retirement and fight Covington if he disagrees with his promotion style so strongly. Schaub did not approve of the idea, saying, “For Khabib to [say that]… What are you doing dude?”

“Always trying to make the headlines with hot takes, right? And I love Khabib but that ain’t a hill to die on. ‘Boycott fighting him.’ I have an idea, Khabib, why don’t you get out of retirement and beat Colby. Why don’t you do it the legal way?

Call for ‘boycott’ against Colby Covington by Khabib Nurmagomedov

Khabib Nurmagomedov weighed in on the incident via a tweet that condemned Colby Covington‘s actions and called for all welterweights to decline a fight with him. While this has been posted from Nurmagomedov’s account, it could have been written by his manager, Ali Abdelaziz, who has been known to maintain the social media accounts of his many talented fighters.

Covington has not commented on the incident publicly as of now.

Jorge Masvidal handed himself into the Miami police on Wednesday and was charged with aggravated battery and criminal mischief. He has since been released on bail of $15,000 and awaits trial. He is alleged to have assaulted his victim (Covington), who chose to remain anonymous in the police report, with a fractured tooth and an abrasion to his left wrist.

Do you think Khabib Nurmagomedov should come out of retirement to fight Colby Covington?